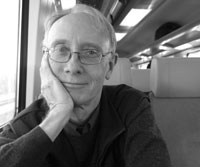 David MacDougall is an ethnographic filmmaker, scholar, and writer on cinema, the social sciences, and education. Although born in the USA of American and Canadian parents, he has lived in Australia since 1975. He was educated at the Dalton School, the Putney School, Harvard University, and the University of California at Los Angeles. His first film To Live with Herds won the Grand Prix "Venezia Genti" at the Venice Film Festival in 1972. In 1973 he received a Guggenheim Fellowship, which was used to make a trilogy of films on the Turkana of northwestern Kenya with his wife, Judith MacDougall. Since then he has made a number of prize-winning films in Australia, Europe and India focusing on the social experience of people in diverse situations and cultures. These include Photo Wallahs (1991), made with Judith MacDougall, on local photographers in the hill station of Mussoorie. In 1995 he won the Earthwatch Film Award. In 1997 he began a long-term study of the Doon School in northern India. This has resulted in five films, the first two being Doon School Chronicles (2000) and With Morning Hearts (2001). Retrospectives of MacDougall's work have been held in New York, Amsterdam, Berlin, Munich, Freiburg, and Tokyo. His publications include a book, Transcultural Cinema and such journal articles as 'Beyond Observational Cinema', "'Ethnographic Film: Failure and Promise', "'Photo Hierarchicus: Signs and Mirrors in Indian Photography' , and "'Social Aesthetics and The Doon School'". A new book of essays is due to be published in 2004. In 2001-02 he was a Visiting Fellow at the Institute for Advanced Study in Berlin. He is currently an Australian Research Council Professorial Fellow at the Centre for Cross-Cultural Research at the Australian National University and Director of its Program in Visual Research.

David MacDougall completed his Visiting Fellowship at the Institute for Advanced Study in Berlin (Wissenschaftskolleg) in July, having spent a year working on a book on visual anthropology. During the year he also gave papers and other presentations in London, Paris, Rome, Munich, Heidelberg, Tunis, Rome, Sydney and New Delhi. In August he completed an ARC Queen Elizabeth II Fellowship and took up a new ARC Australian Professorial Fellowship at the CCR, where he will work on a research project on social aesthetics funded by an ARC Discovery grant. In March and October he made field trips to India to further his work on the Doon School Project and survey sites for a new ethnographic film project to begin in 2003. In October he concluded the first stage of a collaborative project funded by an ANU Faculty Research grant to explore intentionality in ethnographic filmmaking with Gary Kildea, Director of the Ethnographic Film Unit at the Research School of Pacific and Asian Studies. Toward the end of the year he completed the fourth film in the Doon project, The New Boys, and edited the final film in the series, The Age of Reason.

1977/78 To Get That Country. Australian Institute of Aboriginal Studies. 70 minutes. (Director/Camera)

1968/89 Imbalu: Ritual of Manhood of the Gisu of Uganda, Richard Hawkins and Suzette Heald. 75 minutes. (Camera)

'A Silence in Stockholm' CVA Newsletter, Commission on Visual Anthropology 1/95.

1981 'A Need for Common Terms" SAVICOM Newsletter', Society for the Anthropology of Visual Communication 9 (1): 5-6.

1980 'Notes on the Making of Lorang's Way" A Retrospective of the Ethnographic Films of David and Judith MacDougall', Gerald O'Grady (ed.) Buffalo: Media Study/Buffalo: 8.

"The films of David and Judith MacDougall evince a special brand of casual elegance. ... These artists are among the world's finest anthropological filmmakers." - Film Forum, NY.

"Documentary does not stand still. ... Objectivity is not claimed, and in the work of the MacDougalls and Rouch, is replaced by the close attention to detail and the structure of the observed event. This produces a new form of narrative close to the work of Renoir, Rohmer, Olmi or Loach. It is in ethnographic film that this is seen at its clearest. ... The MacDougalls [are] the best of the observational film-makers." - Colin Young, Edinburgh International Film Festival.

"David and Judith MacDougall are the most prolific and important ethnographic filmmakers in the anglophone world today." - Lucien Taylor, American Anthropologist.

"The MacDougalls' films accomplish the very goal of cultural translation to which the finest ethnography aspires." - Fred Myers, Cultural Anthropology.

"David MacDougall is one of the leading anthropological film-makers of the generation following Rouch's. ... The twenty or so films that he has both shot and directed have been highly influential in establishing a model of good practice in ethnographic film-making. MacDougall also has the ability to write elegantly and reflectively about what he does." - Paul Henley, London Review of Books.

"MacDougall stands as one of the great creators of, and commentators on, film working today." - Bill Nichols, San Francisco State University.

"The MacDougalls' films have set a standard of professional quality and integrity which may well mark out guidelines for this type of ethnographic film-making for many years to come." - James Woodburn, Royal Anthropological Institute.

"For those familiar with the field of Visual Anthropology, the name MacDougall appears with welcome regularity. ... This volume [Transcultural Cinema] shows that David MacDougall's theoretical insights equal his outstanding contribution to the practice of ethnographic film-making." - T. Wright, Journal of the Royal Anthropological Institute.

"Though modest in tone, 'The Wedding Camels' demonstrates a structural sophistication well beyond that of almost any other documentary film work today." - Bill Nichols, Film Quarterly.

"[The Wedding Camels is] the freshest and most engaging film of its kind since the early days of Jean Rouch." - Charles Spelvin, Soho News, NY.

"The MacDougalls' beautiful new anthropological feature on the Turkana people of Kenya is an extraordinary film; a breakthrough in generic terms. ... The Wedding Camels relies strongly on the translation of spoken language to convey complex relationships and in larger, more cinematic terms to create a highly expressive, often comical study of human nature." - Film Forum, NY.
___________________________________________________

"[Lorang's Way] is a sort of laidback Citizen Kane." - The Village Voice, NY.

"Lorang's Way focuses upon a Turkana elder who serves not only as the subject of a beautifully observed portrait but also in many ways as a spokesman for the Turkana. ... The film could be described as a 'philosophical essay' which resists written description, so rich and detailed are its images and statements." - James Woodburn, Royal Anthropological Institute.

"To Live with Herds was to influence a generation of film-makers who were seeking a documentary style which got closer to people of non-literate cultures." - Peter Loizos, Innovation in Ethnographic Film.

"MacDougall's early film, To Live with Herds (1971), is often cited as a classic example of observational cinema, while much of his subsequent work (the Turkana trilogy and the collaborations with Australian Aboriginal communities) is acknowledged to constitute an important critique of the genre." - Anna Grimshaw, Visual Anthropology Review.

The MacDougalls' considerable achievement with the East African films was to follow Rouch's lead in working for a more 'direct' documentary style, but to add to it an ability to allow events to unfold, and subjects to comment at a more leisurely pace. To Live with Herds was the most important ethnographic film to have been made since Chronique d'un été and it was intellectually a much more complex film text than the Rouch-Morin film. - Peter Loizos, Innovation in Ethnographic Film.

"[To Live with Herds is] one of those rare documentaries that seem to have a life of their own... Mr. MacDougall's camera is quietly there, observing all, missing nothing in this moving, penetrating, anthropological picture. No wonder it was cited at last year's Venice Film Festival." - Howard Thompson, The New York Times.

"[To Live with Herds] offers an admirable harmony of photographic and editorial styles. In few other films do tribal people speak so naturally and informally about themselves." - Roger Sandall, Sight and Sound.

"The Doon School films are landmark visual essays into the cultures of middle class modernity in India. They will prove important tools towards an understanding of the institutional sites and cultures of the self that constitute postcolonized life." - Prof. Sanjay Srivastava, Deakin University.