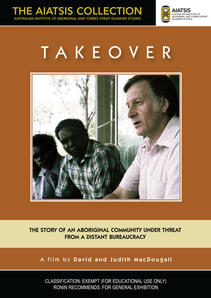 DIGITALLY RE-MASTERED FROM ORIGINAL FILM MATERIALS! One of the major works produced by the AIAS Film Unit, this documentary observes the profound effect on an Aboriginal community of political and bureaucratic decisions made far away. Although specific to time and place, the film is timeless and universal in its observations of a conflict between an Indigenous minority and a powerful government.

The film presents an insider's view of events that followed an announcement made without warning on 13 March 1978 that the Queensland state government was taking over control of the Aboriginal community of Aurukun in the north of the State, displacing the Uniting Church which had managed the Aboriginal Reserve for 70 years.

At the request of the community, filmmakers David and Judith MacDougall documented the events of the following weeks, as the community marshalled its supporters to resist the takeover, and a stream of lawyers, politicians, Church officials, government advisers and representatives of mainstream media arrived to talk with the Aboriginal Council and the community at large.

Ostensibly driven by a desire to access the mineral wealth in the Aurukun area, the state government was resistant to modifying its position, but intervention from the Federal government forced a sequence of compromises, though not always with the community's knowledge or to their satisfaction.