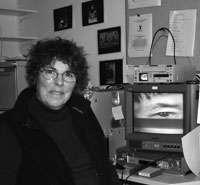 Judith has made more than a dozen documentary films in Africa and Australia, and more recently, working in India and China with digital video. The film DIYA was filmed in India on digital video and continued her interest in developing new strategies to examine the relationship of people to their constructed environment and material culture. Her film, THE ART OF REGRET, filmed in Kunming, China, examines the effect of the Cultural Revolution on current photographic practices and how the digital revolution is changing the way in which photography is used. The film moves from scenes of family albums to large technically advanced studios, and raises questions about the role of photography as a medium of truth and fantasy. She will continue to work with cross-cultural issues, and with the development of strategies for using video as a research tool in fieldwork situations.

She has also taught film and video production courses in the USA, Europe, and China.

1973-75 National Endowment for the Humanities (U.S.A.) grant for ethnographic filming among the Turkana in Kenya. (Co-Director)

1968-69 Committee on International and Comparative Studies (U.C.L.A.-Ford Foundation) grant for ethnographic filming among the Jie of Uganda

2006 The Art of Regret, for the Centre for Cross-Cultural Research. ANU, Canberra. Examines contemporary
photography in Kunming, China: how the digital revolution has changed it and how the Cultural Revolution affected the way people consider and use photographs.

2001 Diya, Centre For Cross-Cultural Research, ANU, Canberra. Follows the 'life history' of a diya, a small oil lamp, and the lives of the people who make it, sell it, use it, and finally discard it after the festival of Diwali. Shot in Northern India.
56 minutes (Director, cinematographer, editor)

1991 Photo Wallahs, Australian Broadcasting Corporation, Australian Film Commission and La Sept (France). A film about local still photographers and their clients, and the meanings of photography in a hill station in northern India.
58 minutes. (Co-Director)

1984 Collum Calling Canberra, Australian Institute of Aboriginal Studies. An account of two Aboriginal men steering their way through the often frustrating processes of official decision-making as they attempt to fund an Aboriginal enterprise to make it self-supporting.
58 minutes. (Co-Director)

1983 A Transfer of Power, Australian Institute of Aboriginal Studies. A single event, (exchanging motors in 'the Mighty' Holden Kingswood sedan) reveals much about work practices and relationships of Aboriginal men on a cattle station in New South Wales.
28 minutes (Director/Editor)

1981 A Wife Among Wives, an investigation of how the Turkana people in Northwest Kenya view marriage.
72 minutes. (Co-Director)

1978 Takeover, Australian Institute of Aboriginal Studies. An inside view of the State/Federal confrontation over Aboriginal rights at Aurukun, northern Queensland.
90 minutes. (Co-Director)

1977 The House-Opening, Australian Institute of Aboriginal Studies. A film about a widow and her family and the preparations for her mourning ceremony that combines European, Aboriginal and Torres Strait Island elements.
45 minutes. (Director, Editor, Sound)

1974 The Wedding Camels, a narrative documentary about a wedding among the Turkana in northwest Kenya.
l08 minutes. (Co-Director)

1974 Lorang's Way, a portrait of a Turkana man and the forces that have made him what he is.
70 minutes (Co-Director)

1968 To Live With Herds, a feature-length documentary film about the implications of development policies for the Jie of Uganda during a period of drought.
(Co-Producer)

1968 Imbalu Ethnographic Film Program, University of California. An ethnographic film of how two Gisu boys of Uganda prepare for and pass through the ordeal of initiation. (Second Camera)

"The films of David and Judith MacDougall evince a special brand of casual elegance. ... These artists are among the world's finest anthropological filmmakers." - Film Forum, NY.

"Documentary does not stand still. ... Objectivity is not claimed, and in the work of the MacDougalls and Rouch, is replaced by the close attention to detail and the structure of the observed event. This produces a new form of narrative close to the work of Renoir, Rohmer, Olmi or Loach. It is in ethnographic film that this is seen at its clearest. ... The MacDougalls [are] the best of the observational film-makers." - Colin Young, Edinburgh International Film Festival.

"David and Judith MacDougall are the most prolific and important ethnographic filmmakers in the anglophone world today." - Lucien Taylor, American Anthropologist.

"The MacDougalls' films accomplish the very goal of cultural translation to which the finest ethnography aspires." - Fred Myers, Cultural Anthropology.

"David MacDougall is one of the leading anthropological film-makers of the generation following Rouch's. ... The twenty or so films that he has both shot and directed have been highly influential in establishing a model of good practice in ethnographic film-making. MacDougall also has the ability to write elegantly and reflectively about what he does." - Paul Henley, London Review of Books.

"MacDougall stands as one of the great creators of, and commentators on, film working today." - Bill Nichols, San Francisco State University.

"The MacDougalls' films have set a standard of professional quality and integrity which may well mark out guidelines for this type of ethnographic film-making for many years to come." - James Woodburn, Royal Anthropological Institute.

"For those familiar with the field of Visual Anthropology, the name MacDougall appears with welcome regularity. ... This volume [Transcultural Cinema] shows that David MacDougall's theoretical insights equal his outstanding contribution to the practice of ethnographic film-making." - T. Wright, Journal of the Royal Anthropological Institute.

"Though modest in tone, 'The Wedding Camels' demonstrates a structural sophistication well beyond that of almost any other documentary film work today." - Bill Nichols, Film Quarterly.

"[The Wedding Camels is] the freshest and most engaging film of its kind since the early days of Jean Rouch." - Charles Spelvin, Soho News, NY.

"The MacDougalls' beautiful new anthropological feature on the Turkana people of Kenya is an extraordinary film; a breakthrough in generic terms. ... The Wedding Camels relies strongly on the translation of spoken language to convey complex relationships and in larger, more cinematic terms to create a highly expressive, often comical study of human nature." - Film Forum, NY.
___________________________________________________

"[Lorang's Way] is a sort of laidback Citizen Kane." - The Village Voice, NY.

"Lorang's Way focuses upon a Turkana elder who serves not only as the subject of a beautifully observed portrait but also in many ways as a spokesman for the Turkana. ... The film could be described as a 'philosophical essay' which resists written description, so rich and detailed are its images and statements." - James Woodburn, Royal Anthropological Institute.

"To Live with Herds was to influence a generation of film-makers who were seeking a documentary style which got closer to people of non-literate cultures." - Peter Loizos, Innovation in Ethnographic Film.

"MacDougall's early film, To Live with Herds (1971), is often cited as a classic example of observational cinema, while much of his subsequent work (the Turkana trilogy and the collaborations with Australian Aboriginal communities) is acknowledged to constitute an important critique of the genre." - Anna Grimshaw, Visual Anthropology Review.

The MacDougalls' considerable achievement with the East African films was to follow Rouch's lead in working for a more 'direct' documentary style, but to add to it an ability to allow events to unfold, and subjects to comment at a more leisurely pace. To Live with Herds was the most important ethnographic film to have been made since Chronique d'un été and it was intellectually a much more complex film text than the Rouch-Morin film. - Peter Loizos, Innovation in Ethnographic Film.

"[To Live with Herds is] one of those rare documentaries that seem to have a life of their own... Mr. MacDougall's camera is quietly there, observing all, missing nothing in this moving, penetrating, anthropological picture. No wonder it was cited at last year's Venice Film Festival." - Howard Thompson, The New York Times.

"[To Live with Herds] offers an admirable harmony of photographic and editorial styles. In few other films do tribal people speak so naturally and informally about themselves." - Roger Sandall, Sight and Sound.

"The Doon School films are landmark visual essays into the cultures of middle class modernity in India. They will prove important tools towards an understanding of the institutional sites and cultures of the self that constitute postcolonized life." - Prof. Sanjay Srivastava, Deakin University.