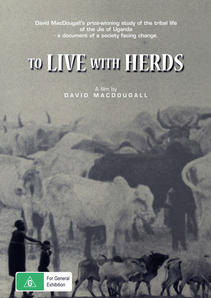 A classic of ethnographic cinema, at last readily available in Australia. TO LIVE WITH HERDS is a film about the Jie, a predominantly pastoral people of northeastern Uganda. Following a period of relative isolation under the British Protectorate government, the Jie are now under increasing pressure to exchange their traditional culture and subsistence economy for a cash economy and participation in a modern nation-state. The film examines this predicament in the light of Jie values. The question is not whether change is avoidable, but whether forms of change can be found that extend rather than attack the foundations of Jie life.

"One of the most humorous, touching, formative, and (in both spirit and aesthetics) beautiful anthropological films I have ever seen ... A prophetic look into the human costs of the political changes which are sweeping the new African states." - Karen Cooper, Film Forum, New York. "One of those rare documentaries that seem to have a life of their own." - Howard Thompson, The New York Times.