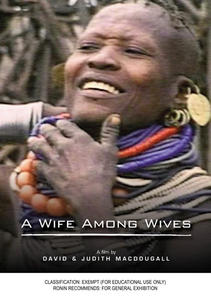 We hear the testimony of three remarkable sisters (one of them being Arwoto, the senior wife of Lorang, who figures so prominently in the other films). We also experience the gradual unfolding of plans for a marriage in a neighbouring homestead. In the course of these plans we learn why a woman would want her husband to take a second wife, and how the system of polygyny can be a source of solidarity among women while at the same time it may brutally disregard the feelings of individuals.

The Turkana speak rationally and with insight about their choices. They are well aware of the contradictory problems associated with individual liberty and communal survival. The film admirably demonstrates how Turkana culture - and by extension, human culture - is a living thing, shaped by the people who carry it.

A WIFE AMONG WIVES was chosen for screening at the Margaret Mead Film Festival; the Field Museum's Anthropology Film Festival; and the Festival dei Popoli in Florence.