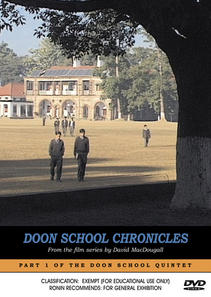 PART 1 OF THE DOON SCHOOL QUINTET

Filmed over a two-year period by David MacDougall, this film looks at the life of Indian middle-class boys as they experience the effects of institutional, national, and global pressures during the transitional years from childhood to adulthood.

The film explores the 'social aesthetics' and ideology of the school through its rituals, the physical environment it has created, and its effects upon several boys of different ages and temperaments. It is divided into ten 'chapters,' each headed by a text taken from school documents.

"An extraordinarily insightful and intimate exploration of the social and cultural landscape of India's most elite boys' boarding school. In following the boys' daily routines and dramas, the film also affords us a rare glimpse at processes of postcolonial Indian identity formation. This is a wonderful teaching tool that will enhance any course dealing with issues of adolescence, education, institutional structure and 'habitus,' or postcolonial elites. My students were stupefied by the eloquence, independence, and maturity of the Doon School boys." - Lucien Taylor, The Film Study Center, Harvard University.