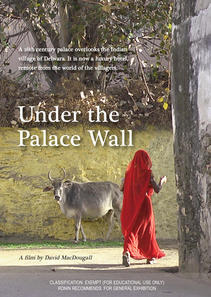 From the 16th century the Indian village of Delwara in southern Rajasthan was ruled as a principality of the kingdom of Mewar. Its palace, which overlooks the village, is now a luxury hotel - a world remote from the daily life of the villagers. Following on from his film SchoolScapes, which was inspired by the early cinema of Lumière, David MacDougall here employs a series of precisely observed scenes to explore Delwara's local primary school as a part of contemporary village life—a life that continues "under the palace wall".

This beautifully composed film is an eloquent impressionistic portrait of the life of the village, without a linking narrative and without linking characters. Rather it shies away from conventional literal meanings to convey instead something more delicate and elusive - the feeling of the place, the sense of the historical past that towers over the village, the vitality and chaos of the daily life of the villagers.

The film was officially selected for screening at the 2014 Gottingen Ethnographic Film Festival in Germany. The festival's selection committee wrote the following comment:

"David MacDougall is one of the best known ethnographic filmmakers and writers in the world. In his last book The Corporeal Image (2006) he speaks about a new, more sensorial type of observational cinema. The film you are about to see highlights his concept. Under the Palace Wall is a sensitive depiction of everyday life in a small village of Rajasthan, India. Having the structure of a single day, this observation project introduces gestures, expressions, composite landscapes, and atmosphere, leaving the viewer with the feeling of being there. The film proposes feelings rather than interpretation, presence rather than explanation — an excellent example of the possibility of a filmic sensory ethnography."

The following comments about the film come from the program of the Margaret Mead Film Festival:

"This keenly observed film explores life in Delwara, a village in southern Rajasthan ruled for centuries as a principality of the former kingdom of Mewar. Delwara's glittering palace, which looms above the village, has been converted into a luxury hotel; nestled beneath its walls sits the local primary school.

"Director David MacDougall uses the juxtaposition to enchanting effect, capturing a series of scenes at the school to compose an eloquent, impressionistic portrait of the life of the village, eschewing a linking narrative and recurring characters to convey something more delicate and elusive: the feeling of the place, the sense of the historical past that towers over the village, the vitality and chaos of the daily lives of the villagers."