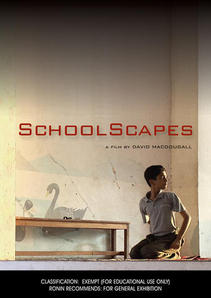 Since completing the Doon School Quintet, his series of films about an elite boys' boarding school in North India, MacDougall has turned his attention to other institutions for children in India. The coeducational Rishi Valley School in Andhra Pradesh was founded on the educational principles espoused by Jiddu Krishnamurti, who stressed the importance of observing the world around us more calmly and simply, as if with fresh eyes. SchoolScapes was made in this spirit.

SchoolScapes continues David MacDougall's examination of education and adolescence at Rishi Valley school in companion films – Some Alien Creatures and Awareness, both available from Ronin.

"This is a film I have wanted to make for a long time, ever since I wondered what it was like for Louis Lumière when he viewed his first rolls of film in 1894 or 95. How simple and yet how magical those first moving images must have been.

One of the aims of SchoolScapes was to try to recapture that simplicity - of cinema at its beginnings, in its purest form.

Another aim was simply to find out what the camera will allow us to see if we watch events without the usual expectations of narrative and editing. How does applying the cinema frame to quite ordinary things change them for us?"