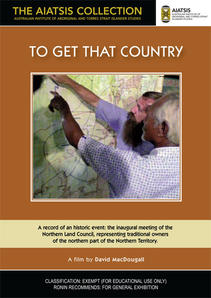 Without narration, and without identification of individual speakers, the film provides an invaluable record of two events which occurred in the final week of January 1977, and which marked "a turning point in legal recognition of Aboriginal rights to land".

The film documents discussions among traditional owners and white officials and legal advisors, at a large gathering at Batchelor, 100km south of Darwin.

This meeting then flowed into the second major event: the inaugural meeting of the Northern Land Council, a body constituted to represent traditional owners. The Federal Minister for Aboriginal Affairs, Ian Viner, addresses the meeting and underlines the importance of the day – as the first time that traditional Aboriginal law is recognized by the Federal Government's legal system.