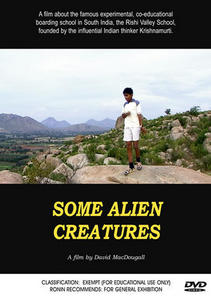 In this film about a progressive co-educational boarding school in South India, young boys and girls jokingly accuse each other of being like "alien creatures." In exploring this divide the filmmaker, David MacDougall, examines the lives of three boys at the school: Ashutosh, aged 10, Anjney, aged 12, and Deepak, aged 14. The engaging portraits that emerge reveal the thoughts and resourcefulness of the boys as well as their problems, dreams, and daily activities.

The film gives an insight into contemporary Indian childhood which should catch the interest of Australian children of the same age. At the same time, it presents the everyday reality of one of India's most famous schools, founded on the educational ideas of Krishnamurti, one of India's most prominent 20th century thinkers. The film will be especially useful in opening up discussions about gender relations.

Some Alien Creatures begins David MacDougall's examination of education and adolescence at Rishi Valley school, continued in two companion films – the award-winning SchoolScapes and Awareness, both available from Ronin.