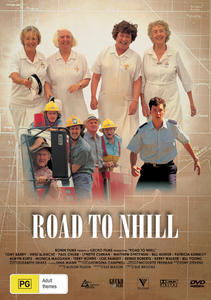 ROAD TO NHILL follows the events of a lazy summer's afternoon in the town of Pyramid Hill (pop. 550) in central Victoria. One day, a car-load of lady bowlers flips over on the way home from a tournament at Quambatook. Confusion escalates as word about the accident spreads around the town. No-one knows for certain who was in the car, how bad the accident is, or even where it is. Is it on the old Nhill Road, or is it on the road that actually goes to Nhill?

Husbands go in all directions in search of their wives; helpful passers-by take the women involved in the accident in other directions; the ambulance gets lost; and the local policeman misses the accident altogether.

The film boasts one of the finest ensemble casts ever brought together for an Australian feature film. The depth of experience is rare on a first feature film. Monica Maughan, Lynette Curran, Patricia Kennedy, Lois Ramsey, Bill Hunter, Terry Norris, Denise Roberts and Alwyn Kurts are among the best known names and faces from Australian cinema and television, including serials and series such as Bellbird, Homicide, Cop Shop, Prisoner, Country Practice and The Mavis Bramston Show.

"In the same comic tradition as 'The Castle', but vastly superior." - David Stratton, SBS Movie Show.

"A breath of fresh air ... might be the best day trip you've had in the cinema for a good while." - Leigh Paatsch, Herald Sun.