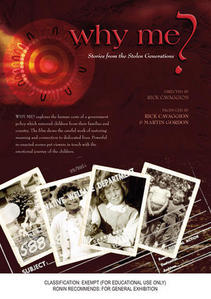 This documentary is one of the most compelling films on this subject that we have yet seen. We are confident that it will become a landmark film in the fullness of time. Much of its power comes from its beautifully staged re-enactments of key moments in the lives of the individuals who tell their stories in the film.

WHY ME? contains the stories of five stolen children who are now adults trying to get on with their lives. The stories are told using powerful period re-enactments, which put the viewer in touch with the emotional journeys of the five children.

The film places the children's experience in the context of the government policies that led to their removal. These members of the most recent stolen generations had a different experience and were removed under different conditions than the earlier more publicised generations. The government's philosophy had changed and its methods were more subtle, but the results were as cruel as ever, and children were removed more efficiently and in greater numbers than before.

The film looks at the enormous impact that being taken from their families had on these five people. Children who are taken away at a young age miss the opportunity to bond with their parents and their families, and this is something that affects them for life. The loss of family has tremendous repercussions – this is a simple human truth.

A recurring theme through the film is the sense they all experience of being an outsider wherever they are. But the film is not just a description of blighted lives. Each of the people featured here has struggled courageously to find a direction for themselves, often against difficult odds. In the end everyone has to deal with the hand they have been dealt in life, and this film documents and celebrates the courage and hope that these individuals have displayed on their particular journeys.