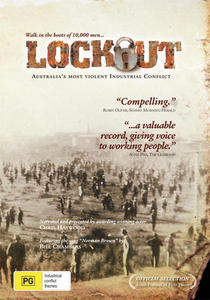 The story of Australia's most violent industrial conflict: in 1929, 10,000 miners found themselves locked out of their Hunter Valley coal mines in a bitter industrial dispute over pay rates. What began as an undeclared war on industrial labour ended up overpowering a government, crippling an industry and besieging a community.

In 1929, in the face of collapsing demand for coal, mine owners in the Northern Coalfields of NSW, announced (with the support of the conservative State Government) that they would reduce miners' wages by 12.5 per cent and strip them of their hard won industrial rights. When their union, the Miners Federation, refused to agree to these terms the mine owners locked the gates. They were to remain closed for 15 months. 10,000 miners, pit boys and their families now found themselves without a job, forced to subsist on government handouts and charity.

What began as an undeclared war on industrial labour ended up overpowering a government, crippling an industry and besieging a community.

Community anger brewed into a day of violence, with police firing on civilians, killing one and wounding many. Subsequently, the 'Unlawful Assemblies Act' was introduced by a Government fearing all-out civil war.

This event challenged the rights of every Australian, and redefined the political and industrial landscape of a country that witnessed an event forever remembered as 'The Great Australian Lockout'. This story is told by the men and women who fought, against extraordinary odds, in extraordinary times, for what they believed in – a fair day's pay for a fair day's work.

"If it happened today, it wouldn't have been forgotten quite as quickly." - David Kettle, TV  Week.