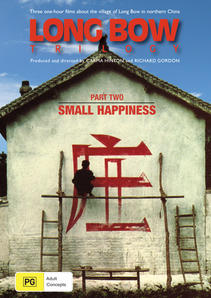 Despite the tremendous advances women in China have made, serious problems continue. Long Bow women talk about love, marriage, work, birth control, birth customs and the now outlawed custom of foot binding. Truly moving interviews with Lingqiao and her mother-in-law draw us into their lives.

SMALL HAPPINESS is the second part of a three part series [Part 1: ALL UNDER HEAVEN; Part 3: TO TASTE 100 HERBS]. The three films are extraordinary portraits of contemporary Chinese life. Carma Hinton is uniquely qualified as an observer of China. She is the daughter of William Hinton, whose detailed first-hand descriptions of Long Bow Village's experiences of revolution since 1947 in the books FANSHEN [1966] and SHENFAN [1983] are well-known. Carma Hinton was born in Peking in 1949 and spent the first 21 years of her life in China. As a young student during the Cultural Revolution, she travelled the countryside and worked in villages like so many young Chinese of her generation. She had visited Long Bow many times before the six months of filming in 1983 that went into the making of the LONG BOW TRILOGY.