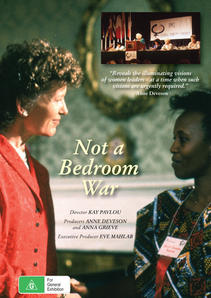 In 1992, four hundred of the world's most prominent women met in Dublin to discuss new visions of leadership. Hosted by Mary Robinson, Ireland's first woman president, NOT A BEDROOM WAR is the behind-the-scenes story of this historic and extraordinary gathering.

The documentary's title refers to a comment made by writer Betty Friedan in the 1970s in which she said that feminism wasn't just an issue between men and women, it was about changing the world.

The feminist movement has come a long way in the last 25 years, as witnessed by some of the extraordinary women who spoke at the conference.

We meet Vigdis Finnbogadottir, the President of Iceland and the first woman in world history to be elected a constitutional head of state; Betty Friedan, American feminist author; Bella Abzug, American political activist and former member of the US Congress; Indian economist Devaki Jain who has established a bank for street women which gives them independence and safety. Also featured is Ruth Bamela Engo-Tjega, from the Cameroons, a United Nations advocate for African food security who spoke of cultural difference and expectations in that western models are not appropriate to women of the third world. Anne Summers, Australia's advisor to the Prime Minister on women's affairs and an organiser of the forum and Iola Mathews, from the Australian Council of Trade Unions, were in attendance and feature on screen.

The essence of feminism, said Mary Robinson, was women getting power over themselves, not over men. "Women may well be establishing a new kind of leadership, one that is enabling and empowering of the individual and the group."

"A provocative discussion opener and a vehicle for bringing women and men together." - EVE MAHLAB.

"The varied experiences of the women fuel animated and often heated discussion, giving us new insights into global problems and new strategies and models for leadership." - ANNE DEVESON.

"Reveals the illuminating visions of women leaders - at a time when such visions are urgently required." - ANNE DEVESON.