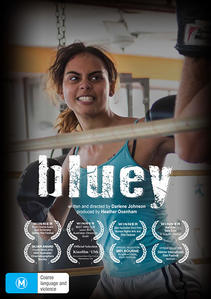 August 2016: BLUEY wins Best Short Film award at the First Peoples Festival, Montreal.The official citation reads (translated from French): "The director looks right into the darkness of a troubled teenage girl's soul, with precise and spare writing that gets to the heart of the matter. The film conveys all the emotional storms of adolescence with pure images where no artifice muffles the impact of the story".

This short drama by Darlene Johnson (director of THE REDFERN STORY, CROCODILE DREAMING, GULPILIL: ONE RED BLOOD and STOLEN GENERATIONS) is a moving and powerful portrait of a young woman (played by Tasia Zalar), trapped in a cycle of violence, hopelessness and despair. She meets a mystery mentor who could change everything.

"A searing portrait of one young woman's attempt to reconcile past and present as we walk the tightrope of her self-destructive emotions." - Phillip Noyce.

Tasia Zalar is an outstanding actress who went on to appear as Shevorne in Series 1 and 2 of the ABC outback thriller, MYSTERY ROAD.