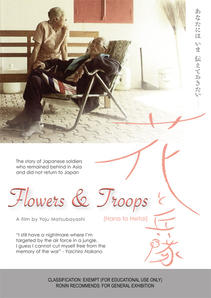 Inspired by the documentaries of the great Imamura Shohei, under whom the filmmaker studied, this film explores the lives of Japanese soldiers who chose not to return to Japan when the war finished, but who stayed behind in south-east Asia to build new lives for themselves.

"I still have a nightmare where I'm targeted by the air force in a jungle. I guess I cannot cut myself free from the memory of the war", Yaichiro Nakano, an 87-year-old former soldier says without any emotion. He looks like a typical old man in Japan, but he resides in Mae Sod, a border city between Thailand and Burma.

During World War II, around 330,000 Japanese soldiers were sent to India, Thailand and Burma. More than half of them died. Wartime operations which ignored supplies, brought the Japanese military to a state of devastation. After the end of the war, most of the soldiers who survived returned to Japan after being held in concentration camps run by the Allied Forces.

Nameless low-ranked soldiers escaped from the concentration camps. They did not return to Japan, but chose to remain, and indigenised with local societies.

"With disarmament after the war, I left the army and escaped into the local society. My human sense, which was oppressed by the military, had regained its freshness through communication with local people," says Isami Sakai, aged 91. After the war, they blended into village life and became local citizens. Each of them contributed to the development of their new local communities in their own way.

Japanese soldiers who did not return have been stigmatised in Japan as "deserters". However, they have protected their new families, and survived with local societies in lands far away from their original Japanese homeland.

"I still have a nightmare where I'm targeted by the air force in a jungle. I guess I cannot cut myself free from the memory of the war" - Yaichiro Nakano

The Japanese defeat in the war in 1945 was a watershed in modern Japanese history. I was born after the war and had no experience of it. However when I face our history, I cannot help but find some similarities between where present Japan is going today and with its past. More than 60 years ago, Japanese soldiers died in foreign lands for the foundation of Japan without any benevolent treatment by their country. They carried 20 days' food and were tossed about by the orders of commanders to attack eastern India. I got known former Japanese soldiers who survived in foreign countries after the battle in Burma, and became members of local society without returning to Japan even after the war ended. No matter whether they threw Japan away or Japan threw them away, it is the fact that these former soldiers no longer live in Japanese society. My intention of the film is to let young generations in Japan know that those who have been discarded as unproductive people by Japanese society still know the essence of life, by presenting the values of these former Japanese soldiers who have survived in foreign lands.

After the war, they left the Japanese military, which had been the basis of their value system, and were accepted by local societies as individual people. It brought their humanity alive. Presently they are reaching their late eighties. They live as individuals, love women in their new home, built families and enjoy their life although far away from Japan. I would like to tell the importance of these lives to the young generation.