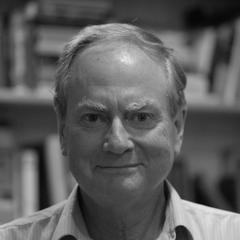 After completing an M.A. on the history of Australian cinema at the Australian National University, Canberra, Andrew worked as a cinema manager for a number of years while he researched and co-authored (with Ross Cooper) a major book documenting Australia's film history, Australian Film 1900 - 1977, published by Oxford University Press in 1980. Andrew also researched and wrote many articles on film, published in magazines and newspapers; and made several short films.

Andrew also served for three years as Consultant to the National Library's National Film Collection, on the acquisition of films for study purposes in schools and universities. He also worked for three years as a Research Fellow in the Department of Pacific History at the A.N.U. There he co-directed an award-winning documentary, ANGELS OF WAR [1982], about the experiences of the people of Papua New Guinea in World War Two.

In 1974, he formed Ronin Films with his wife, Dr Merrilyn Pike, a specialist in China studies. The company was involved in many innovative distribution and marketing activities, especially the theatrical release of documentaries. Since the mid 1990s, the company has specialised in the distribution of Australian social documentaries.

Andrew has a keen interest in policy issues affecting the film industry as a whole and is a frequent contributor to debates on industry issues.

2009: began an on-going association with the Asia Pacific Screen Academy, initially as a Jury member in their annual Awards, and subsequently from 2010 to the present day as Chair of the MPA APSA Film Fund. This fund has achieved an unusually high success-rate among the projects it has supported financially in the Asia-Pacific region, most notably Asghar Fahardi's Oscar-winning A SEPARATION (2011) from Iran.

2008: appointed to the Board of the newly created independent National Film and Sound Archive, and served until 2012.

2007: Awarded a Medal in the Order of Australia for his services to the film industry and the community.
Awarded on Honorary PhD by the University of Canberra.

2005: Plaque erected in the ACT Honour Walk in Canberra City, for contributions to the community.

2003: Appointed by the French Government to the rank of Chevalier dans L'Ordre des Arts et Lettres for his work in the distribution and exhibition of French cinema in Australia.

1992: Special award from the Australian Film Critics' Circle for contributions to the film industry.