HOW TO RUN A SCHOOL CONCERT 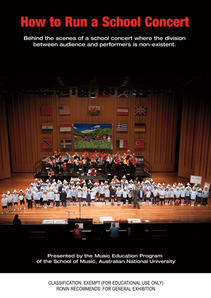 This documentary (formerly released as THE BIG GIG) explores some of the strategies involved in applying the radical philosophy developed over many years in music education by Dr Susan West of the School of Music at the Australian National University. The film and the event it records complement the ideas presented in Dr West's COMMON ARTISTRY lecture (also available on DVD from Ronin).

In 2010, Dr West and her colleagues Georgia Pike and Nicole Mengel, in the Music Engagement Program at the ANU, mounted what they termed an "Outreach Concert" involving some 2,200 primary school pupils from 18 schools in Canberra. The participants were encouraged not to worry about "excellence" and accuracy in their performance but to make music in such a way that would encourage the audience to join in. As the concert reveals, the audience response was overwhelmingly enthusiastic.

The key difference between this and many other school concerts is one of intent, which Dr West and her colleagues discuss in the documentary. If the intent of the "performers" is to engage others, there is minimal evidence of stage fright, issues of right or wrong notes dissipate, and a relaxed atmosphere of fun and joy in singing prevails.

Schools elected to be involved at a range of levels, whether they wanted to sing from the auditorium, from the stage, or both. All participants were given a selection of songs to learn, and schools could also elect to present a song of their own on the stage. Some of these "presentation" songs rehearsed by individual schools also had interactive elements where "audience" could join in.

Some schools brought their entire population, while others brought particular cohorts. Groups presenting songs on stage were not auditioned, as consistent with MEP principles, and could include children from one or several school years.

A community group, with members ranging from 4 to 84, played an important role in helping to support both the musical and social elements of the event, and was open to anyone, regardless of age or musical background. T­­his group met weekly for two months prior to the event and leant much of the concert repertoire as well as preparing their own items.

A group of instrumentalists was assembled from players in Canberra and from the Riverina Conservatorium of Music in Wagga Wagga. The leader of the group, Dr Lauren Davis, prepared arrangements that allowed any volunteer to participate, without audition, and regardless of skill level.

HOW TO RUN A SCHOOL CONCERT
(documentary, 28 mins)

THE CONCERT ("The Big Gig") in its entirety, filmed with three cameras, and with optional commentary by the MEP team (74 mins)