ON THE BANKS OF THE TIGRIS 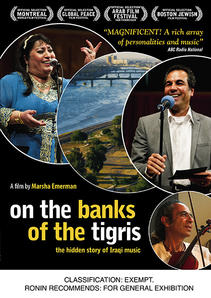 A musical odyssey that uncovers the hidden – and almost erased – story of Iraqi music.

As a young boy, Majid Shokor loved singing and listening to music in the cafes and markets of Baghdad. Music and acting were his passions, but Saddam's brutal regime shattered his dreams and forced him to flee.

Australia is a safe haven, but the music of childhood lingers in Majid's mind. He begins to search and makes a startling discovery - that many of the best-known Iraqi songs were written by Iraqi Jews. Saddam's regime purged Iraqi music of its origins, but Majid re-engages with his musical history as he travels the world to meet exiled Iraqi musicians - Jewish, Muslim and Christian - who still sing and play these songs.

Majid's quest takes him from Australia to Israel, Europe and Iraq to find some of the great Iraqi musicians and to record their stories. Young and old, they all share a sense of loss and longing for their homeland.

Majid's dream of a unifying concert bears fruit when Iraqi musicians of all faiths perform together in a joyful celebration at London's Barbican Centre.

This moving film re-discovers a wealth of music and performance and celebrates the cultural ties that link Iraqis of all faiths, now scattered throughout the world.