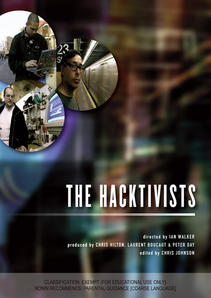 In THE HACKTIVISTS, we meet four main characters: Nart Villeneuve, a Canadian, Renaud Courvoisier, a French man, Paul Mobbs from the UK and Ricardo Dominguez from the USA. Each has different skills and ways of operating but the internet allows them to pool their talents and work collaboratively on-line to challenge government and corporations. Depending on your point of view, you may see them as 'internet warriors' trying to save the world, as 'cyber-terrorists' out to break the law, or as foolish 'geekboys' causing digital mischief from the safety of their homes.

The documentary also looks at their opponents in what the documentary calls an 'information war'. The growth in web-based activism has also created an industry devoted to opposing them Cybersleuth such as Ben Venzke make a lot of money by protecting companies from cyber attack, scouring the web for evidence of intended action. It raises questions as to what kind of globalisation we want, what democracy means in a digital age and what power and responsibilities we have as citizens in this time of rapid change. The Hacktivists is the first of a planned trilogy of films about The Information War. The second will be The Dreamweavers, looking at the tactics of corporate advertising and their battle for consumers' attention and the third will be The Culture Jammers, examining the artists who use their art skills to try to keep the media honest by re-arranging media messages and reflecting them back to those who make them.