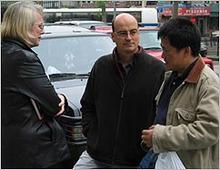 Chris Hilton is one of Australia's most prolific and award winning producers who has made films across a broad spectrum of subjects and genres for the world's major broadcasters. He has executive produced or produced over two hundred hours of quality productions for broadcasters such as PBS, BBC, Channel Four, Arte France, ZDF, Discovery, RTE as well as local Australian television networks. Titles include The Irish Empire (5 x 60) for BBC2, RTE and SBS, Bondi (6 x 30) for Channel 4 and ABC, Year of the Dogs for BBC2 and ABC, Renzo Piano: Piece by Piece (feature) for ZDF Arte and ABC, The Colony, for SBS, RTE and The History Channel, DOPE: The Battle for the Soul of Sport for Discovery Times, CBC and ABC, Bitter Harvest for WNET New York, SBS and France 2/5. Chris's recent credits include Ten Pound Poms for ABC, BBC and The History Channel, the 7 part science makeover series Is Your House Killing You? for SBS and the theatrical feature documentary The Choir with National Geographic Films.

He also has a body of work as a producer/writer/director including Dealing with the Demon, a three hour history of the opium and heroin drug trade for ABC and PBS, Shadow Play: Indonesia's Years of Living Dangerously (2001) for BBC, PBS, SBS and Arte and Dying To Leave a series on people smuggling and trafficking which premiered in the USA on PBS in 2003 as a two hour prime time special and which won both a Logie Award and a Walkley Award for excellence in journalism.