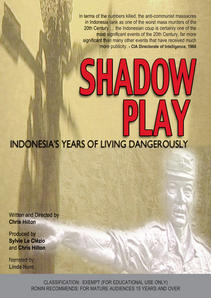 In Indonesia, on 30 September 1965 a group of President Sukarno's guards murdered six generals who were anti-Communist. General Suharto blamed the Communist Party of Indonesia (PKI). Suharto grabbed power and set up death squads to murder up to a million accused Communist sympathisers. The documentary traces the events from 1965 to today.

For the last forty years in Indonesia, we have been watching a shadow play. We have seen the wayangs or shadow puppets acting out a drama and though we were unable to catch the words, we thought we could follow the story. But now it is time to peer behind the screen.

The terror campaign of 1965-66 was the bloody birth of General Suharto's New Order in Indonesia and set the tone for the way most western governments have dealt with Indonesia until the eruption of violence in East Timor in 1999.

Shadow Play is a full and frank account of the slaughter of more than 500,000 people in Indonesia, and the period of history that was triggered when Indonesia's first president, Sukarno, was swept from power.

Now, more than three decades later, with the fall of General Suharto, Indonesians can, for the first time, begin to confront their hidden history. The film follows the personal story of the American-educated Ibnoe Santoro who was swept up in the carnage in 1965 and whom we see finally exhumed from a mass grave. But his family's attempts to give him the dignity of a proper burial stir violent passions from the past.

We also follow the stories of two survivors of Suharto in their seventies, one an English woman, Carmel Budiardjo, who returns from forced exile after 30 years, and the other Dr Sumyarsi, a doctor who spent 11 years as a political prisoner.

The massacres received very little publicity at the time (or since) and the film explains how this came to be. Through interviews with journalists covering the story we reveal the secret war of propaganda and media manipulation waged by the Indonesian army and actively aided by the governments of the United States, Britain and Australia. With the Vietnam War escalating in 1965 the anti-communist west was obsessed with deposing President Sukarno and ridding South East Asia of communism.

Shadow Play is a powerful film which portrays the human cost of this forgotten footnote of the Cold War and its ghosts which are very much alive in Indonesia today.

In terms of the numbers killed, the anti-communist massacres in Indonesia rank as one of the worst mass murders of the 20th Century ... the Indonesian coup is certainly one of the most significant events of the 20th Century, far more significant than many other events that have received much more publicity. - CIA Directorate of Intelligence, 1968.