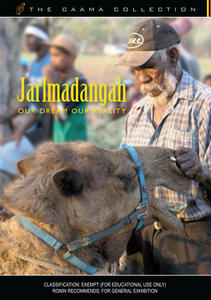 Situated south of Derby in the West Kimberleys, Jarlmadangah is a unique community often hailed as 'a model community' for its many social and cultural achievements. At the centre of the story are two brothers, John and Harry Watson, Elders in the Nyikina and Mangala nations.

The community was first formed in 1987 when John and Harry Watson set out to establish Jarlmadangah as a focus for strong family ties, traditional language, law and culture, with the main aim of passing these onto the next generations of young people in the two nations.

Illustrated by archival photos and moving images, John Watson tells the history of the community and looks back at his family's history. As a young adult, he witnessed poverty and slums in Indonesia and became determined to return to his home land and build a community free from alcohol and poverty, where children could be safe and traditional culture protected. Self-reliance was a basic principle of the new community. As John Watson says: "We are not sit-down people – we have a lot of responsibility".

In October 2008, Jarlmadangah hosted the Kimberley Land Council and Kimberley Aboriginal Law and Culture Festival over a 5 day period, to coincide with their own community's 20th anniversary celebrations. People from all over the Kimberleys came for this celebration, complete with dance, song and hunting.

Through the film, we are welcomed into a remote Indigenous community and have the opportunity to gain an insight into way of life – where we go well off the beaten track.