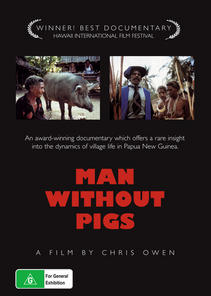 "There are many complex areas of the cultures of Papua New Guinea for instance which are not yet familiar to anthropologists and others." says Dr Waiko.

"Anthropologists talk in the classroom about the subtle differences of class and alliances. But it is extraordinary to see this portrayal with such insight into the situation." - Dr Arth, Margaret Mead Film Festival, New York.

"TABARA village (John's birthplace) is a community where no-one works for money, no-one pays for things with money and there are no wheels. His family, who have always lived there, expect John to compete and advance within the village, according to village rules, but he is not as alert to the detail of ritual, and the forces that flow in the village, as some of his age-mate rivals. John's strength is that he can intervene in the outside world to secure benefits for the Tabara community. His family wish him to be a man of status within the village: his rivals want to have the right to make John carry their message to the outside world." - Hank Nelson.