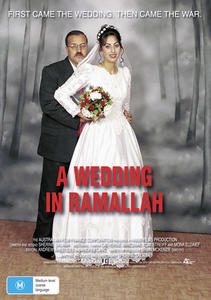 From acclaimed filmmaker Sherine Salama, the story follows a marriage between an American-based Palestinian man (Bassam Abed) and a young woman (Mariam), with a traditional village upbringing. Bassam works as a telephone repairman in Cleveland, Ohio, and returns to the West Bank town of Ramallah to find a wife. A few weeks later the two are married and we are offered unique insight into the arranged wedding. The film subsequently follows their desperate attempts to secure a visa to America for Mariam, and her resulting life in Cleveland, languishing in an apartment with no friends
or support.

"Australian film maker Sherine Salama, becomes something of a confidant to her subjects, and brings us disconcertingly close to them: we become privy to gossip, family rows, hasty confidences, moments of frustration, occasions of high expectation and intimacy." - Philippa Hawker, The Age.

"Utterly involving, Salama's film foregrounds a slyly feminist view of life under occupation - methodically disempowered men can make methodically lousy husbands - while keeping a sympathetic eye out for the ploys with which pride can withstand the most outrageous indignity." - Bill Gosden, New Zealand Film Festival.