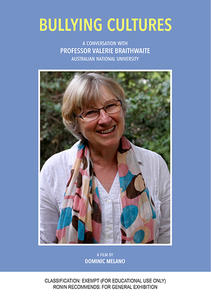 While most of us have not directly experienced the pain of serious bullying, we all know of someone who has. As a society we are genuinely horrified by stories of people whose lives have been destroyed by bullying. We have heard enough of them from schools, children's residential homes, youth detention centres, refugee detention centres and workplaces. Introducing laws against bullying was thought by many to be the answer, to set a standard for behaviour, to hold people accountability and most importantly to stop bullying. But laws need to catch on, and anti-bullying laws have not reached deep enough into the culture to do the job expected of them.

This film complements the many anti-bullying programs for schools and workplaces through explaining the social and psychological dynamics that contribute to a bullying culture and what must happen to break that culture. To stop bullying, change needs to happen at a very fundamental level in how we relate to each other. Stopping bullying becomes everyone's responsibility.

The starting point for all of us is to recognize how we learn not to bully. Most of us have tried a 'soft' version of bullying, that is, dominating someone to the point where we made them uncomfortable. We learn from these close encounters that dominating others can hurt them. We back off and find better ways of relating to people. But not everyone learns the lesson, and sometimes people forget the lesson because of the difficult social and psychological space they find themselves in.

For 20 years a research team at the Australian National University looked at what this social psychological space that allowed bullying to flourish might look like in schools and workplaces. This research identified the management of shame and pride as prime markers of a bullying culture. Where pride is expressed in a narcissistic way and this is encouraged culturally, bullying is more likely. When shame cannot be acknowledged but is displaced onto others through blame and anger, bullying is likely to be found.

The question these research findings raise is are our schools, organizations and workplaces designed to allow us to manage our shame well and express our pride in a way that is inclusive and not demeaning of others? The answer is no. Too much of our public space assumes that productive lives and exemplary performance require triumphalism. If being better than someone else is allowed to become the main yardstick of success in schools, organizations or workplaces, bullying will retain its cultural roots regardless of the procession of individuals that enter in health and leave in despair.

Professor Valerie Braithwaite is internationally recognised for her work on how people adapt when their institutions fail to address their needs, hopes and fears. Her studies extend across a range of controversial issues, including school and workplace bullying, where laws and regulations have provided only a partial solution to social problems. Her published books include "Defiance in Taxation and Governance" and "Hope, Power and Governance", and she has co-edited and contributed to many other publications including "Shame Management through Reintegration", "Trust and Governance", "Regulating Aged Care" and "Anomie and Violence".