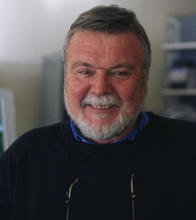 Chris Owen (1944-2018) contributed directly or indirectly to almost every significant documentary made in Papua New Guinea over three decades from the 1970s onwards – whether as director, cinematographer, editor or as adviser and trouble-shooter.

For health reasons, he moved to Canberra in Australia in 2010. For years he had deteriorating eye-sight and in 2017 became fully blind. He died in Canberra on Friday 9 March 2018.

BRUKIM WARRA BILONG WANTOAT - A feature documentary set in the Morobe Province of PNG in co-production with the Australian National University & University of Papua New Guinea.
SUTIM NOS - A feature documentary set in the Wondakia district of the Eastern Highlands Province of PNG.
IT'S ALL OVER NOW - Script development 1st draft (a historical/contemporary drama set somewhere in the Pacific).

The documentaries and the feature drama TUKANA have been presented at international film festivals (Edinburgh, New York, London, Tokyo, Paris, Hawaii, Bombay, Madrid, Cyprus, Sydney, Melbourne, Tashkent and Rome among others), and screened on broadcast television in Australia, West Germany, and Japan.

TUKANA co-directed with Papua New Guinean actor Albert Toro, was invited for presentation at the 'New Directors / New Films' Festival in New York following a screening at the Hawaii International Film Festival.
TUKANA was awarded a Special Merit at the Tashkent International Film Festival by the Journalist & Writers Union of the former USSR.
MAN WITHOUT PIGS was awarded 'Best Documentary' at the Hawaii International Film Festival 1990, and the 'Peoples Choice Award'- Kauai.
MAN WITHOUT PIGS won the 'International Jurors' STA prize at the 1991 Sydney Film Festival.
MAN WITHOUT PIGS was invited for screening at the Royal Anthropological Institutes bi-annual International Festival of Ethnographic Film, U.K. 1992, at The Bilan du Film Ethnographique, the St Petersburg International Filmfest Russia, and the FilmForum Ethnologie, Frieburg FRG.
Owen was awarded San Francisco Film Festival GOLDEN GATE AWARD for Cinematography on the IPNGS co-production SENSO DAUGHTERS, which also won 'Best Documentary Award' at the Melbourne Film Festival.
Another IPNGS associated production COWBOY & MARIA IN TOWN won 'Best Documentary', Sydney Film Festival 1991.
BRIDEWEALTH FOR A GODDESS was awarded 'The Grand Prix NANOOK' at the 17th Bilan du Film Ethnographique in Paris. 2000. The film also won the award for 'Best Documentary' at the 4th Belo Festival of Ethnographic Film, in Brazil.
BRIDEWEALTH FOR A GODDESS was also invited for screening at the Royal Anthropological Institutes bi- annual Festival of Ethnographic Film. Dec.2000, at the National Museum of Ethnology 'Miupaku', special event, Osaka, Japan, and at the Mostra Internacional do Filme Ethnografica, Rio de Janeiro, Brazil.
BRIDEWEALTH FOR A GODDESS has been awarded the 'Prize for Excellence' by the American Anthropological Association to be presented Washington DC Dec2001. The film has been awarded 'The Museum Prize' at the Parnu Festival Estonia.
An exhibition of still photographs by Owen took out the P.A.T.A. Golden Award in competition at Tokyo in 1974.
The body of work is used extensively as course material in many Universities, and has been used in support of major museum shows (e.g., 'An Assemblage of Spirits' Minneapolis Institute of Art and 'Pieces of Paradise' Australia Museum).
Ref: Expressive Culture in Papua New Guinea - a Guide to Three Films by Chris Owen , pub. Documentary Educational Resources '
Mortuary Ritual and Prestige Economy - the Malangan for BukBuk.' By Bruce Lincoln ( Cultural Critique 89)

In November 2017 Chris Owen received a Life-time Achievement award from the Society for Visual Anthropology in the USA. The award was actually presented twice in Washington, D.C., with two different though slightly overlapping audiences. The first was on 29 November at the end of the Visual Research Conference held in the depths of the Smithsonian Institution's Museum of Natural History. Dr Allison Jablonko, filmmaker and member of the SVA Board, spoke to contextualise Chris's work, and was joined by Dr Jerome Crowder from the Institute for the Medical Humanities, University of Texas.

The second presentation was on 1 December at the end of the SVA Members' Meeting and Award Ceremony. This time the speakers were Jacqueline Lewis-Harris and her partner, Gene Harris, both of whom had been in PNG for many years and knew Chris well.

Dr Crowder reported that the ceremonies and an accompanying compilation of highlights from Chris's films were "a lovely and personal tribute to Chris and his lifetime of hard work and dedication to his passion for filmmaking and the people of PNG". He went on to say that "I heard many voices in the audience say things like, "I had no idea those were his films!" or "Wow, that's a body of work I need to look into!" The young filmmakers certainly don't know this material and I'm sure they will look into these films for inspiration and wisdom. Please spread the word, it was a terrific moment and definitely worth waiting for!"

Here is the reel of a highlights from Chris Owen's work (selected by him) which was screened in Washington, and which is a great reminder of the vitality, beauty and importance of his work as a filmmaker: vimeo.com/246664019

On Thursday 22 February 2018, Chris Owen received an award in recognition of his distinguished career, from the Australian Cinematographers' Society. In a simple and very moving ceremony in Fred Ward Gardens, a nursing home where Chris is now a resident, three senior members of the ACS presents Chris with a small plaque and a certificate.

The Certificate was an Honorary Membership of the ACS, and the plaque was awarded to celebrate Chris's "outstanding contribution to ethnographic film making, recording the culture and traditions of Papua New Guinea."

The following is an article written by Prof Don Niles, Acting Director of the Institute of Papua New Guinea Studies, where Chris worked from 1976 to 1999:

For his films on Papua New Guinea over more than three and a half decades, Chris Owen has been awarded a Lifetime Achievement Award by the Society for Visual Anthropology. This took place at the annual meeting of the American Anthropological Association (AAA) held recently in Washington, DC.

The Society for Visual Anthropology was founded in 1984 as a section of the AAA to promote the use of images for the description, analysis, communication, and interpretation of human behaviour. Its Lifetime Achievement Award is given to individuals whose body of work is recognized for its exemplary impact on the field of anthropology. Chris is only the ninth person to receive such an honour.

Chris Owen's award acknowledges his outstanding films on PNG traditional and contemporary culture. Ceremonies were held on 29 November and 1 December. While ill health prevented him from being present, colleagues, friends, and admirers of his work spoke on his behalf and saw a video thank-you message from Chris filmed at his home in Canberra, as well as highlights he selected from some of his documentaries.

Chris was born in Birmingham, UK, in 1944 and was educated in both the UK and Australia, in particular at the Birmingham College of Art and Design, where he received a graduate diploma in visual communication.

He moved to Papua New Guinea in 1973, initially employed as cinematographer by the Tourist Board, but joining the Institute of Papua New Guinea Studies as resident filmmaker in 1976. He was tasked with designing and initiating an ethnographic filmmaking programme that documented and preserved PNG cultures on film, and providing professional training for PNG filmmakers. He would be devoted to these tasks until his retirement in 2010.

In 2000 Chris became the head and later the director of the National Film Institute (formerly, Skul bilong Wokim Piksa) in Goroka, where he rebuilt the institution and its functions after it was destroyed by fire in 1996. At the time of his retirement, he had spent 37 years working at PNG government institutions, 34 of those years at bodies under what is today called the National Cultural Commission.

Chris Owen's many years of productivity, dedication, and commitment to the people of PNG have resulted in an extraordinary rich and prolific output. Many of his films document spectacular aspects of traditional culture, such as The Red Bowmen, Malangan Labadama, and Bridewealth for a Goddess.

Other films focus on the ways individuals and groups have found to deal with potential conflicts between traditional and modern value systems, such as Man without Pigs, Gogodala—A Cultural Revival?,and Betelnut Bisnis. Chris directed one of the best known and most widely seen PNG contemporary dramas written for the screen,Tukana—Husat i Asua? He has also focussed on developmental issues and initiatives, such as Ramu Pawa, Re-Forestation Naturally, and the two films in the Real Options series.

Chris's films have been shown at film festivals in Australia, Belgium, Brazil, Cyprus, France, India, Italy, Japan, the Netherlands, Papua New Guinea, Russia, UK, USA, and Uzbekistan, and have received countless international awards. His films have also been shown on television in countries such as Australia, Brazil, Germany, Japan, and Thailand, as well as PNG. They are used as course materials at numerous universities and museums in the US, Australia, and France.

While Chris is the filmmaker of least 16 films, he is credited in more than 33 others with various roles in the filmmaking process. Indeed, Andrew Pike, film historian and managing director of Ronin Films has noted that Chris 'has contributed directly or indirectly to almost every significant documentary made in Papua New Guinea over the last three decades—whether as director, cinematographer, editor, or as adviser and trouble-shooter' .

Chris has always been dedicated to teaching others about making films and has been eager to share his passion about filmmaking. Within PNG, such work has seen collaborations with Michelle Baru, Robert Buleka, John Himugu, Baik Johnston, Leonnie Kanawi, Ruth Ketau, Martin Maden, and Ignatius Talania, amongst others.

One of these collaborators, PNG filmmaker Martin Maden, has commented, 'I do not know of one other culture whose children will inherit a film heritage such as the one Chris Owen has given to the people of Papua New Guinea'. Maden further observed that Chris 'is seen by some of us as the greatest documentary cinematographer ever'.

Chris received PNG's 10th Anniversary of Independence medal in 1985, and was made an Officer of the Order of Logohu (OL) in 2010. PNG joins the rest of the world in congratulating Chris on his well-deserved recognition from the Society for Visual Anthropology. We must also thank him for his unending commitment to our country and its peoples, and for contributing such a magnificent legacy in film.