BRIDEWEALTH FOR A GODDESS 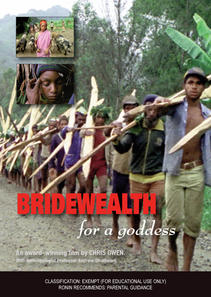 This film documents the last performance of the ritual for the fertility goddess Amb Kor, in the Western Highlands Province of Papua New Guinea. Shot over a period of approx. 15 years, the anthropologists and filmmakers have been participant-observers during a time of pivotal change for the clans of the Kawelka tribal group.

The Kawelka people live on tribal land near Mount Hagen in the Wahgi Valley, in the Western Highlands Province of Papua New Guinea.

This film by Chris Owen, one of PNG's leading filmmakers, is a remarkable record of a ritual that took years to prepare and may never be performed again.

At the centre of the film is Ru Kundil, a "Big Man" among the Kawelka people. He tells his own story in the film. One night in a dream he is visited by a beautiful young woman, the Spirit Goddess, Amb Kor. In response to the dream, Ru involves his family and supporters in a cult in which the men seek to make a "marriage" with the Goddess. Through elaborate rituals, the Goddess grants the men purification and protection from the menstrual powers of their human wives, the procreation of many sons, and the blessing of fertility to crops and pigs.

For Ru, the successful sponsoring of this complex and expensive cult is essential to his position as a leader among his people. The film climaxes with the cult's energetic ceremonial dance, and the mass distribution of sacred pork, witnessed by thousands of people.

BRIDEWEALTH FOR A GODDESS screened at the Dix-nuvieme Bilan du Film Ethnographique 2000 (Ethnographic Film Panorama) Paris, where it was awarded the 'Grand Prix NANOOK'. The film was also invited for screening during the year 2000 at the National Museum of Ethnology 'Miupaku', special event, 'Ethnology & the Rise of Cinema' Osaka, Japan, at the Mostra Internacional do Filme Etnografico, Rio de Janeiro, Brazil, and by the Royal Anthropological Institute at the International Festival of Ethnographic Film, London.

Chris Owen's earlier films include the documentaries MAN WITHOUT PIGS, THE RED BOWMEN, MALANGAN LABADAMA and GOGODALA, and the feature film, TUKANA (co-directed with Albert Toro). All are available from Ronin Films. He has also contributed to the films of many other filmmakers who have worked in Papua New Guinea, including Dennis O'Rourke, Les McLaren, and Bob Connolly and Robyn Anderson.

"I do not know of one other culture whose children will inherit a film heritage such as the one Chris Owen has given to the people of Papua New Guinea." - Martin Maden, PNG filmmaker.