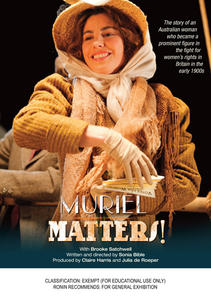 Adelaide-born actress and elocutionist Muriel Matters has been neglected by mainstream history, but in the early 1900s was a pivotal figure in the fight for women's rights in Britain and was renowned for her daring escapades to draw attention to the cause.

In London 1909, an actress from Adelaide made worldwide headlines after taking to the skies under a 25-metre balloon emblazoned with the slogan, 'Votes For Women'. Known as 'that daring Australian girl', Muriel Matters was inspired by playwrights, anarchists and revolutionaries to use her performance skills and bravery in the fight for women's rights.

When Adelaide-born actress and elocutionist, Muriel Matters, arrived in London in 1905 to seek her fortune on the stage, she was astonished to discover that English women didn't yet have the vote. She joined the Suffragette movement and soon became known for her wild exploits: distributing leaflets from a dirigible balloon, touring England to make impassioned speeches from a horse-drawn caravan, and chaining herself to a grille in the House of Commons, becoming the first woman to speak in the House in 1909. She was sent to Holloway Prison and on release added prison reform to her list of campaigns.

Together with other Australian women painters, cartoonists, composers and banner-makers living in London, Muriel made a remarkable contribution to the fight for women's suffrage: in the first political use of street art, slogans and information were chalked on pavements and buildings to spread the word about political demonstrations.

Muriel has, however, been mysteriously been ignored in the mainstream historical record. This film shares Muriel's love of art and performance and tells the story of Muriel and her artistic friends with verve and gusto.

Through archival images, interviews, dramatic reconstruction and animated sequences, the film explores how this extraordinary woman got lost from history, and reveals what her story tells us about the links between art, politics and women's rights in England and Australia.

We recommend the 2018 publication which includes the story of Muriel Matters: You Daughters of Freedom: The Australians Who Won the Vote and Inspired the World by Clare Wright, available now from good booksellers and from Text Publishing (553 pages).