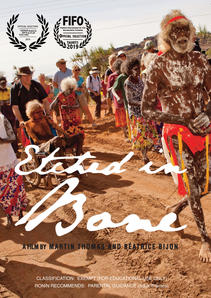 Etched in Bone was officially selected to screen at the annual Environmental Film Festival in Washington DC, in the auditorium of the National Museum of Natural History, the very building where stolen human remains were stored.

When the Smithsonian Institution in Washington DC agrees to repatriate stolen human bones from northern Australia, an Aboriginal elder creates a ceremony that restores his ancestors' spirits to their homeland.

Jacob Nayinggul is a charismatic elder from Gunbalanya, an isolated settlement in Arnhem Land, northern Australia. Aboriginal people in this area believe that the landscape is inhabited by the spirits of their ancestors whose bones can be seen in crevices and caves.

Nayinggul is aware that many of the old burial sites have been disturbed by scientists who collected human remains for museums. This presents the terrifying possibility that ancestral spirits were wrenched from their traditional country.

Drawing on original footage from National Geographic, this carefully crafted documentary explores the impact of one notorious bone theft by a member of the 1948 American-Australian Scientific Expedition to Arnhem Land. Hundred of bones were stolen and deposited in the Smithsonian Institution in Washington DC.

When the location of the bones became known to Arnhem Landers in the late 1990s, elders called for their return. This resulted in a tense standoff with the Department of Anthropology at the Smithsonian—and eventually in the repatriation of the bones.

Made over eight years, Etched in Bone gives extraordinary insight into the deep and enduring conflict between scientific and traditional forms of knowledge. In moving footage, we see how the repatriated bones are removed from their museum boxes, coated in red ochre and wrapped in paperbark. In this way, Jacob Nayinggul draws on ancient knowledge to create a new form of ceremony that welcomes home the ancestor spirits and puts them to sleep in the land where they were born.

"It is a tribute to Thomas and Bijon that it is essentially Nayinggul's film. He establishes its tone and controls its message.

"This is an exceptional piece of filmmaking, governed by qualities of restraint and attunement that are essential to its subject. Thomas first visited Gunbalanya in search of recordings of Aboriginal song, and the musicality of the film as a whole — with compositions by Yolngu musician Joe Gumbula and original music by Eric Bijon — is one of its most appealing characteristics."

1. a conversation between the filmmakers, Martin Thomas and Béatrice Bijon, about the eight-year process of making the film. They discuss why Jacob Nayinggul decided to go public public about the rituals of repatriation and they give the back story of how the bone theft was filmed in 1948.

2. a powerful statement about the importance of repatriation by the Honourable Kim Beazley AC, the Governor of Western Australia, filmed while he was Australian Ambassador to the United States.

'It's impossible here to do justice to the power, both visual and cultural, of this film. ...It is characterised by delicate cadence – a tone that captures the continuum of enduring, ancient civilisation and most of all of how life, which comes from the earth, must return to the country from where it came.' - Paul Daley, The Guardian Online

'A brave, necessary and courageous film for this country and the world to see. The collaboration with Jacob Nayinggul, his family and community brings home the truth of this story of theft and denial in Australian history .... This is a bold and redeeming story.' - Peter Yu, Member of Council, Australian National University, Former Executive Director of the Kimberley Land Council

'In telling the story of human bones that were taken from Australia to the United States and returned sixty year later, we explore the ethical and cultural challenges of bone theft and repatriation in the Indigenous world. This was possible because of the trust of Jacob Nayinggul and other Aboriginal people with whom we worked. Making this film and showing the rituals of restoring ancestors to their land has been a privilege and a responsibility. It was also a long journey, taking eight years to complete. While the issues are complex, the message conveyed by Jacob Nayinggul is simple. To the dead and to their physical remains we owe the same obligation of respect that we do to people who are living. This obligation applies to all people, regardless of their ethnicity or culture, and it is more important than the claims of science.' - Martin Thomas, Béatrice Bijon

SUNNY AND THE DARK HORSE [from the AIATSIS Collection]