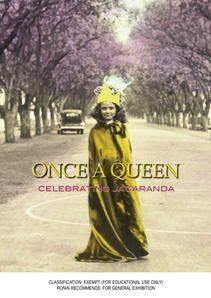 For over 75 years the town of Grafton on the mighty Clarence River in northern New South Wales still celebrates its rich history by the crowning of the Jacaranda Queen.

In the 1880s Henry Volckers, a German migrant, planted the seeds of the Jacaranda tree which he imported from South America. By 1935, the town was amazed at the magnificent avenues of beautiful flowering trees that were of such beauty and splendour that they decided to hold a yearly festival to celebrate the 'arrival of the blossoms' and to crown a girl 'queen of the town'.

The central highlight to this day is the crowning of the Jacaranda Queen. This is not a beauty pageant, and she must be many things to many people in order to represent the town for the coming year. Tradition and ceremony are still central to the 'good old fashioned values' of the festival, in a contemporary world of uncertain futures.

2004 saw the 70th Anniversary of the festival when award-winning filmmaker Lawrence Johnston set out to explore the importance of the festival to the town and what it means to the many women who have been crowned Jacaranda Queen throughout the festival's rich history.

Once A Queen is a beautiful, evocative and emotional portrait, not only of the women and the festival, but also of a proud and vibrant community. The story is specific, but also universal: in the USA, for example, many small town festivals take great pride in their young women competing to be a 'Queen' in a variety of guises. In Australia we have the Beef Queen, Banana Queen, Prawn Queen and Opal Queen which all relate to something particular about their town and identity. But few Australian festivals have the scale, profile or longevity of Grafton's beautiful Jacaranda Festival.

"Here is a festival, which celebrates something which is quite magical ... It is a combination of the simple natural elements of the blossoming of trees every year and the imagination of a town, to form something romantic and deeply felt, and which has also shaped the community's identity for the past seven decades. Tradition and ceremony are central to the 'good old-fashioned values' of the festival, in a contemporary world of uncertain futures.

"The story is universal: in the USA, for example, many small town festivals have young women competing to be a 'Queen' in a variety of guises. In Australia we have a few festivals with annually-awarded queens relating to something particular about their town - the Beef Queen, Prawn Queen, Banana Queen and Opal Queen are just some. But few Australian festivals have the scale, profile or longevity of Grafton's Jacaranda Festival.

"I was interested in exploring notions of beauty, self-esteem, competition and ambition, which are prevalent in these kinds of celebrations. For many women who participate in events like the Jacaranda Festival, it is a way of being noticed, of becoming 'someone', of being popular, of contributing and achieving in their community in their last teenage years before they enter young womanhood.

"I was also very interested in the theatrical side of the proceedings and the serious way this is constructed by the festival committee in terms of 'putting on a show'. There is a strong tradition of performance on many levels in the town during the festival, featuring all kinds of entertainment including music, exhibitions and competitions. Shop staff dress up and perform in the main street in competition for a Gold Cup. On the Saturday of the festival week, there is a spectacular Street Parade, covering many groups and local industries who put the most immense amount of work into their floats.

"Grafton's 300 streets are home to some 6,000 trees of many varieties, some tropical, some sub-tropical, of both native and introduced species, and these avenues of trees come magically alive each year, and are the big attraction for people from far and wide during blossom time.

"I had attended the festival a few times over the years before making the film and one moment stands out: the image of young girls presented on the arms of their fathers on a hot spring night, all lined up on the street and entering the RSL from the side entrance, their names and the names of their fathers read out as they proudly parade through a large arched garland of Jacaranda blossoms to take their seat in anticipation of the Jacaranda Ball. It is seriously part of a ritual coming-of-age for the people of this town. It is also a rather beautiful moment to watch in the lives of these families.

"The film is a mixture of intimate interviews, footage of the town and the main events, still photographs, home movies and archival footage, designed to combine in a beautiful and rich social history of a very special place in Australia".