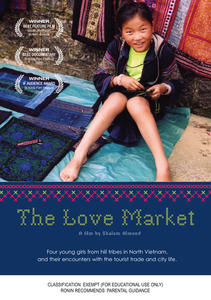 In the highlands of North Vietnam lies the remote town of Sapa, home to a mosaic of colourful hill tribes. Sapa opened to tourism in the late 1990s, and now roughly 200 hill tribe girls aged 7 – 18 years live independently on the streets of Sapa selling embroidery.

Australian filmmaker Shalom Almond visited Sapa as a tourist and became friends with four Hmong girls. The girls were savvy, street-smart and dreamed of life beyond selling souvenirs.

How will these young girls survive the leap from remote tribal culture to 21st century Asia? For three years Shalom returned to Vietnam with her camera to find out.

Shalom Almond also made MY LONG NECK, a film about the impact of tourism on women in northern Thailand (also available from Ronin Films).