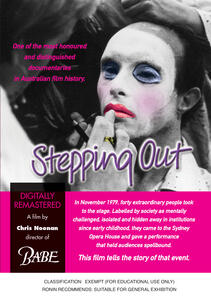 From Chris Noonan, director of BABE, one of the most honoured and distinguished documentaries in Australian film history.

In November 1979, forty extraordinary people took to the stage. Labelled by society as mentally handicapped, isolated and hidden away in institutions since early childhood, they came to the Sydney Opera House and gave a performance that held audiences spellbound. This film tells the joyous story of that event.

Chosen by UNESCO for screening at the official closing ceremony for International Year of Disabled Persons, Paris 1981.

Translated into 9 languages for screening on 19 television networks in 15 countries.

"Technically excellent and brilliantly edited down from the 15 hours of film shot ... a mini masterpiece. Some who have watched the triumphant finale several times continue to be shaken each time by the experience." - Variety, New York

"It comes as a shock to see a new film that leaves one astonished and changed. A film that opens your mind so vigorously that you feel dazed ... Chris Noonan's STEPPING OUT changed my mind about the human mind. It is destined to be acclaimed around the world." - Phillip Adams, The Bulletin.

Produced with assistance from the Australian Film Commission