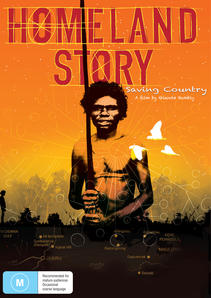 "An extraordinary, and extraordinarily uplifting, story of cross-cultural co-operation, support and love that's also an important document of Australian history, bureaucracy and policy – and of Donydji (East Arnhem Land) culture. A beautifully made film – it's gorgeous to look at – and also a fascinating story traversing more than 40 years and three generations that's confronting in parts but mostly feels like both a joy and a privilege to watch."

SCREENINGS: See link below to download a helpful Guide for Community Screenings! Express interest in hosting a screening by contacting Ronin Films:

Homeland Story is an intimate portrait of Donydji, a small Indigenous community in North East Arnhem Land in the far north of Australia. Homelands are situated on the land of the people who live there. They are of central importance to their identity and culture.

The film charts the Donydji community's transition from nomadic life to the digital age, from the 1960s to the present day. One family is featured, across three generations, from the traditional Elder, Dhulutarama, who still knew how to make stone tools, to his grand-daughter, Joanne Yindiri Guyula, who teaches at the Donydji school. It is a moving portrait of the family's struggle to preserve their culture and remain on their Homeland despite the severe obstacles they face: sub-standard education, deplorable service delivery, lack of job opportunities for the youth, inadequate government policy, bureaucratic mismanagement and pressure from mining interests.

The film also tells the remarkable story of cross cultural co-operation over nearly fifty years. In 1974, Dr Neville White, a biological anthropologist, went to Donydji to conduct research for a PhD. In effect he has never left. Spending part of each year on the Homeland, he responded to the community's request to help them map their clan lands as a way of resisting the threat of mining license claims.

When education, housing and employment opportunities became the community's major concern, Dr White convinced the Rotary Club of Melbourne to fund a major building project that was undertaken by Vietnam Veterans working with the young men of Donydji. Together they built the first school, new houses and a workshop where the youth could learn trade skills to prepare them for employment. Fifteen years later the partnership between Rotary, the Vets and the young men continues.

Homeland Story is a moving portrait of a resilient and determined community facing the challenges of maintaining their Donydji Homeland and preserving their vibrant culture.

Glenda Hambly has worked extensively in television, writing and editing fifteen television series and serials and directing a children's series. She has written and directed two award-winning features: Fran (1985) and Waiting at the Royal (2000) both starring Noni Hazlehurst, and produced a third, The Legend Maker,which premiered at the Melbourne International Film Festival in 2014. She has a PhD in Screen Studies and has lectured in screenwriting at RMIT and Monash Universities.

VIEW THE TRAILER OF HOMELAND STORY HERE: vimeo.com/336773143
The trailer is also available for viewing on YouTube: youtu.be/NxaFUOS0xhI

See link below to download a helpful Guide for Community Screenings!

Produced by Rogue Productions and Donydji Homeland, with support from Screen Victoria, the Rotary Club of Melbourne Inc. and The Baker Foundation.

NOTE: In 1983, research undertaken by Dr Neville White in the Donydji area was documented by filmmaker Kim McKenzie for a documentary, Spear in the Stone, produced by the Film Unit of the Australian Institute of Aboriginal Studies (now AIATSIS). Spear in the Stone is available from Ronin Films here: www.roninfilms.com.au/video/7240/0/12161.html

It's a privilege for me as a descendent of (the) Ritharrngu (clan) to be part of the film. I'm so happy and proud that being part of it means sharing the stories of our people; sharing our culture with the world.

I'd like the film to encourage people to come together and work together. This film shows how the two sides (Yolngu and European) can help each other. Also, I hope it helps motivate Yolngu people to be strong in both the traditional and modern world we're living in today.

I hope this documentary helps the government to understand that Homelands are the best place for Yolngu to raise our children, because it's the only place where we can be close to them. When children move into the bigger communities there are possible bad influences. A few years ago the government wanted to stop funding homelands and move everyone to the hubs, but most hub communities have problems with housing, there's over-crowding, kids don't go to bed early, they skip school. In the Homelands they go to bed early. They know what time to go to school. I strongly believe that the Homelands have more power to control young men and young women and culturally they can teach the young people to take on leadership. In the hubs there's freedom; the kids don't go to bed, they don't learn, they start to disrespect the elders and leaders. That disables the elders to pass on the knowledge. In the hubs there are many elders passing on and taking the knowledge with them, without passing it on the younger generation.

The families of Donydji, the descendents of the Ritharrngu clans, are happy that the documentary has been made. It preserves the images and footage of our ancestors but it tells the contemporary story of Donydji as well. I'm sure the women who speak in the film (Joanne Wanakirr Birdingal and Dolly Dimbura Gulungurr) will cry at first when they see their father and brothers that have passed on, but at the end of the day it will be a blessing because they'll enjoy it, they'll be happy that they spoke about their land and were so strong in speaking about it. It will encourage them to be strong. It will also encourage the young men and women of Donydji and others from around Arnhem land who are Ritharrngu descendents, My goal for the film is for these young people watch the film and then stand up and be strong for our land.

"This film presents a unique vision, documented over decades, of a traditional Indigenous group's working relationship with anthropologist Neville White. Dr White's collaborative research has been melded with his contribution to practical efforts to sustain an outstation in Yolngu country in Arnhem Land. The film illustrates the possibilities of mutually rewarding cross-cultural relationships. Despite the difficulties of remote outstation life, the film shows the strength of Yolngu commitment to living on their country."

"A wonderfully honest and engaging look at the complexities of life in a remote Arnhem Land community and of the close friendship between the Ritharrngu people and anthropologist Neville White and his Vietnam Vet mates."

"The story told by the film is one of struggle but ultimately of hope as it shows a powerful model for the education of Aboriginal people without the destruction of their independence and dignity. ... This film is beautifully made and constructed. It is an excellent ethnographic document which, in many ways, is equivalent to the well-known 2006 film "Ten Canoes", set in the Arafura swamp, which borders on the Donydji country. It deserves to be seen by as many people as possible for it is a story that cannot be readily retold".