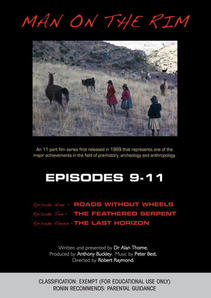 Episode 9: Roads Without Wheels
In South America, also isolated from the rest of the world, there developed a set of societies that faced the continents various environments. People adapted to the cold of Tierra del Fuego, domesticated corn and tomatoes, llamas and guinea pigs. Finally there arose in the Andes a dramatic society, the Incas, the people who were to meet the invading Europeans.

Episode 10: The Feathered Serpent
The enormous complexity that was and still is Mexico rests on the series of societies that evolved there - Olmec, Toltec, Maya, Aztec. This film explores their rise, their links and differences in art and architecture, religion and city planning. So many different societies developed in such a complex region.

Episode 11: The Last Horizon
The last part of the Pacific Ocean to be settled was the huge expanse of the central Pacific itself with its thousands of tiny islands and atolls. We explore the people who left Asia to become the Polynesians, their navigation and extraordinary sailing skills. We see the sorts of societies they made in Hawaii, in Easter Island, Tahiti and New Zealand. We think about what happened when European sails appeared on their horizon to end the isolation of more than half the worlds people.

[These 3 episodes are from an 11 part film series which was first released in 1989 and represents one of the major achievements in the field of pre-history, archeology and anthropology. The series is presented by Professor Alan Thorne from the Australian National University, Canberra and was directed by Robert Raymond.]