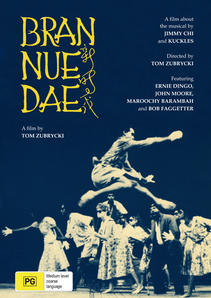 For years Jimmy Chi has been creating BRAN NUE DAE. It is the combination of his own experiences, his views of the world and the pooled talents of his friends who make up the Broome band Kuckles.

BRAN NUE DAE: THE MUSICAL is a story of an Aboriginal boy's flight home from the city of Perth to his homeland at Djaridjin (known to Europeans as Lombadina). His journey in search of identity, love and security takes us across the state in a blend of rock opera, road movie, comedy, song, dance and romance. The music derives from sources as disparate as traditional Aboriginal performance, blues, rock 'n' roll, Hollywood musicals and the rituals of the Roman Catholic Mass.

The film is structured around two main themes: the production of the musical and the life of Jimmy Chi. Both elements are interwoven with key participants, players in Jimmy's life and archival footage.

Jimmy grew up in Broome, a town in the remote north of Western Australia. He is part of a culturally diverse community which results from Broome's history as a thriving Pearling town. Jimmy was sent to a Catholic mission in Perth to complete his secondary schooling and from which he was eventually expelled. After a major car accident and several months in a psychiatric hospital he gave up his university studies, returned to Broome and devoted himself to music and writing songs.

"The passion and the vitality of the performers are thrillingly clear." - The Australian.

Follow this link to view clips from Australian Screen: australianscreen.com.au/titles/bran-nue-dae/