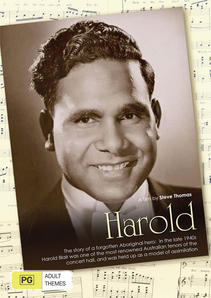 In the late 1940s, Harold Blair emerged as one of the most renowned Australian tenors of the concert hall, at a time when very few Aboriginal people could break through the barriers of the repressive Queensland reserve system.

HAROLD takes us on a sweeping journey from Cherbourg in Queensland where Harold was born on a Reserve in 1924, to the rarified atmosphere of the Melba Conservatorium in Melbourne, then to New York and Harlem where he became politicised. In 1951, the ABC pushed Harold's singing career in Australia, and then dropped him, but Harold's life continued in Melbourne where he became a prominent community member until his premature death in 1976.

The film is far from a conventional "bio-pic": as Harold's story progresses, it becomes apparent that in Harold's public life, his ideas as an activist, and the projects they spawned, were often controversial among Indigenous and non-Indigenous people alike. The film becomes a reflection on these issues of assimilation and identity, and of Harold's role in shaping black-white relations in Australia in the mid-1900s.

Like Paul Robeson in the USA, Harold never shied away from the politics of being black, though it placed great pressure on his family life and children. He explored the uncharted territory of assimilation unassisted by infrastructure or notions of self-determination. And like Robeson, his insistence on talking about rights for his people had consequences on his career.

The film is also rich with archival film and recordings of Harold singing both classical and popular songs. It also features interviews with Harold's surviving family and close friends.