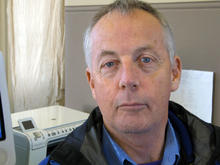 His programs made for the Film Australia History Scheme included Menzies & Churchill at War and Monash the Forgotten Anzac.

His 2005 documentary about Bertram Wainer Abortion, Corruption & Cops was nominated at the 2005 Australian Film Institute (AFI) Awards and the 2006 Sydney Film Festival.

In 2001 John produced and directed Thomson of Arnhem Land for Film Australia and the ABC. Thomson won the $15,000 NSW Premiers History Award, an AFI Award for Editing and was nominated for awards at Banff and Shanghai TV Festivals.

John was also a board member of the Australian International Documentary Conference (AIDC).

The story of Robert Menzies struggle with Winston Churchill over the strategic direction of the second world war.

In January 2002 bushfires ravaged South East Australia. The Woodend fire brigade was at the frontline of the battle.

Takes us headlong into the clandestine, risky but intoxicating world of the computer underground to uncover not only how the hackers did it but why.

A film about the East Timorese struggle for cultural and political survival.

The story of anthropologist Donald Thomson and his lifelong struggle for Aboriginal rights.

Life on the road with Australia's oldest and best loved circus family.

What do you do if you discover you are allergic to the 20th century? A film about three people struggling to overcome the devastating impact of Multiple Chemical Sensitivity.

The story of Aboriginal tenor Harold Blair and his emergence from the Queensland Reserve system to become the last great Australian tenor of the concert hall era.

A one hour documentary about the struggle for survival of the Tasmanian Aborigines.

A one hour documentary about the Burmese struggle for democracy.

A three part half hour series for the ABC about women, love and the lack of it.

Male violence in relationships and how it can lead to domestic murder.

Teenage mothers in the working class suburb of Broadmeadows.

Ep. 3 IT'S A BUSINESS DOING PLEASURE Directed by Sharon Connolly

The working life of a group of Melbourne prostitutes.

A six by one hour video diary series produced by Open Channel and the Film & Television Institute of Western Australia.

A half hour program about the construction of Deborah Halpern's monumental ceramic sculpture now on the banks of the Yarra.

A two by one hour series about international women writers.

Part of a 3 X half-hour series. Uses Australian cinema classics past and present to investigate how Australia has constructed images of 'the Aborigine'.