FROM UNDER THE RUBBLE 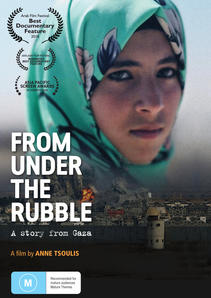 The Samouni family story: a powerful civilian perspective on the violent clash between Palestinians and Israeli armed forces in Gaza. Australian filmmaker Anne Tsoulis has created an intimate and unflinching film about an appalling crisis.

The Samouni family is a peaceful, close-knit family of farmers in Gaza, 48 members of whom were killed when they were herded into a house by the Israeli Defence Force and then fired upon, as part of Israel's battle with Hamas in January 2009.

From under the Rubble is raw, intimate and unflinching, narrated largely by Amal Samouni, who was nine years old when the house she was sheltering in was bombed. Amal was buried under rubble for four days, surrounded by the dead and rotting bodies of family members, until aid workers were finally permitted to enter the area and rescue her. She still lives with more than 15 pieces of shrapnel in her head: they are too deeply embedded to remove safely. Together with her mother Zeenat and her surviving siblings, Amal pieces the family story together, moment by moment, for the camera.

With this film, Australian writer, producer and director Anne Tsoulis has set out to give voice to the civilian perspective on war, and call attention to the fact that the overwhelming majority of those killed and injured in conflict zones are women and children. Anne has spent over 25 years working within the film industry, with numerous credits in drama and documentary.

"When I think about the world, I start wondering why we live like this in Gaza. Why the people outside live in safety in peace. Here, there are always soldiers and war and sieges and closed borders." - Amal Samouni

From under the Rubble has been produced by John Moore of Sensible Films, who has a list of award winning films that include Thompson of Arnhem Land, Menzies & Churchill at War, Monash: The Forgotten Anzac and more recently Putuparri and the Rainmakers.

From under the Rubble was financed through Screen Australia, South Australian Film Corporation, Film Victoria and through the generous support of private inviduals through crowd-funding and the Documentary Australia Foundation.

"Whatever people's convictions are on the conflict, I strongly recommend that they see this documentary and ask the perpetrators (of the massacre) to explain why this unthreatening, innocent family was targeted in such a brutal, disproportionate and criminal manner. We should do whatever we can to bring peace and safety not only to Amal but to all the suffering Palestinians and Israelis who need our support to bring a lasting peace to this conflict."