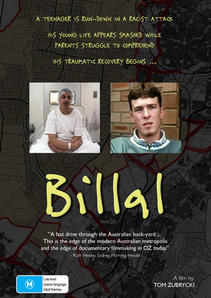 Sixteen-year-old Lebanese-Australian Billal is struck by a car in the aftermath of fighting between Anglo–Australian and Lebanese youths on a state housing estate in south-west Sydney. Billal is hospitalised with permanent brain damage. The film follows Billal's long fight back to some sort of health, and the stresses on his family through this period as they try to come to terms with what has happened to their son, and at the same time struggle to be relocated to another, safer suburb.

The Eter family live on a state housing estate in a suburb comprising mainly Anglo-Australian families. One night a fight breaks out involving the Eters' teenage sons and those of the neighbour. Racial insults are thrown and returned. People are hurt, property is damaged and police are called. The following day sixteen-year-old Billal Eter crosses the road. A car accelerates. His mother sees Billal flying through the air.

Billal lies in a hospital in a coma fighting for his life. Meanwhile his parents plead with the government housing authorities to move them from the suburb where the driver of the car still resides.

While the slow wheels of bureaucracy frustrate the family, Billal pulls out of the coma. His mother tries to nurse him to good health - believing he will eventually return to normal, while his father grieves, un-reconciled to the loss of his son.

The Eters are eventually allocated a house, but Billal's recovery slows and his behaviour begins to regress. The doctors operate, but not before the situation becomes emotionally fraught as Billal gets worse before he gets better. The stresses on the family deepen as they become aware of their son's irreversible medical condition.

In addition to its powerful story of racial violence, the film's observation of Billal's treatment for brain damage and gradual rehabilitation makes BILLAL valuable for health and welfare workers.

"BILLAL is a film from the sharp end of the multicultural debate - and Zubrycki misses none of its complexity ... sympathetic, political and above all humane, this is one of his best films." - Paul Byrnes, Sydney Film Festival Programme.

" A fast drive through the Australian backyard ... This is the edge of the modern Australian metropolis and the edge of documentary filmmaking on Oz today." - Ruth Hessey, Sydney Morning Herald.

Follow this link to view clips from Australian Screen: australianscreen.com.au/titles/billal/