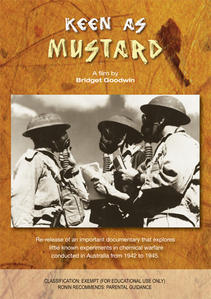 Originally released in 1989, this disturbing documentary looks at a little known aspect of Australian wartime history. Scientists, laboratory staff and military volunteers recount experiences with the Australian Chemical Warfare Unit, which, with the active involvement of both British and American resources and personnel, tested mustard gas in Queensland during the Second World War.

These tests were recorded in films which were once as secret as the experiments themselves. Now available to the public, these images provide vivid illustrations for the stories told by the men and women who participated in the experiments.

The First World War had proved the devastating human toll that mustard gas could take. In 1925, the League of Nations instituted a Geneva Protocol to prohibit use of the gas in war. Nonetheless, in the Second World War, under threat of chemical weapons use by Japan and the Axis powers, the Allies began developing a chemical capacity. Little was known about the behaviour of mustard gas in the tropics; Australian experiments showed it to be up to four times more damaging than in cooler climates. The subjects of those trials inhaled gas, were burned by it, and underwent rigorous assault courses whilst still suffering its effects.

Years later, many of these "human guinea pigs" have serious illnesses believed to be the result of their wartime experience. They evoke the lessons of history to show the harm done when chemical weapons are unleashed.