BLACK AND DUSTY [from the CAAMA Collection] 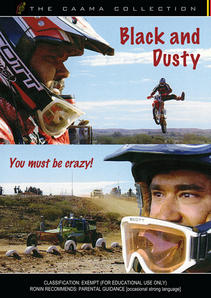 The annual Finke Desert Race is one of the toughest in the world for cars, bikes and buggies – 500 km across the red desert of central Australia. In June every year hundreds of bikes, cars and buggies battle for honours in this 2 day safari, racing 250km south from Alice Springs into the Simpson Desert to the small Aputula (Finke) Community, and back again.

BLACK AND DUSTY follows the exploits of a group of Indigenous competitors, among them Bernard Singer, Steven Tranter and Willie Orr. Also joining the race for the first time is Warwick Thornton, filmmaker (director of SAMSON AND DELILAH and many CAAMA documentaries), who has been an enthusiastic bike rider all his life. The film follows the race preparations, the scrutineering of equipment by race officials, the trials, and the 2 day race itself over severely corrugated and pot-holed tracks, deep in red dust. Crashing and burning is common.

Stunningly filmed by multiple cameras, including a helicopter and Thornton's own helmetCam, the film captures the adrenalin rush of the race and the hopes and disappointments of the competitors. For the Indigenous competitors and their support crews it is also a way of helping to inspire young people to engage in a spectacular and exciting sport.