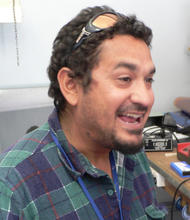 David Tranter is an Alyawarra man from the central desert region of Australia. He first began working with CAAMA Television as a trainee sound recordist in 1989. Since then David has worked on hundreds of CAAMA film and video productions including award-winning documentaries, dramas, television series, video clips and feature films. David is also active in training the next generation of Aboriginal sound recordists.

In 2009 he won the Australian Screen Sound Guild award for Best Sound on a feature film for SAMSON & DELILAH and in 2010 he was a recipient of an AFI Award for his work as a Sound Recordist for the same film.

David's directing career began in 2004 with the making of documentaries about the history and Dreaming stories from his own country. KARLI JALANGU" (Boomerang Today) was quickly followed by LIVING COUNTRY, CROOKHAT AND CAMPHOO (2005), WILLABERTA JACK (2007), "KARLU KARLU (Devil's Marbles) 2008 and "CROOKHAT AND THE KULANADA in 2010.

In 2017, he co-wrote the screenplay for the award-winning feature, SWEET COUNTRY, based on his documentary WILLABERTA JACK.