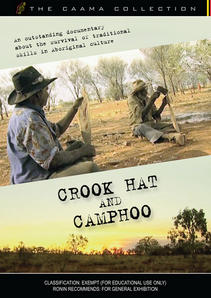 Crook Hat and Camphoo are Alyawarr elders, from central Australia, who are concerned about the survival of traditional skills and culture. As Crook Hat says at the beginning of this outstanding film: "We are telling the old people's way. It's not just our way. We are trying to teach others what we have learnt."

In this film, Crook Hat and Camphoo pass on knowledge and skills relating to the making of spears and spear-throwers (woomeras). The two elders go into the bush to find suitable tree branches for making spears and spear-heads, and use fire to straighten the branches. After peeling the bark and smoothing the wood, they use sinew from a kangaroo and tree resin to fasten the spear-head to the spear. Other wood is used for the spear-thrower or woomera, and again they use plant resin to make a comfortable grip for the hunter.

As they make their spears and woomeras, Crook Hat and Camphoo reflect on the ingenuity of the old ways, and remember being taught by their fathers. Their need to pass on their knowledge is deeply felt and affects everything they do.

This short film is a moving and eloquent reflection on the transfer of knowledge from elders to a new generation of Aboriginal people and to a wider world.­