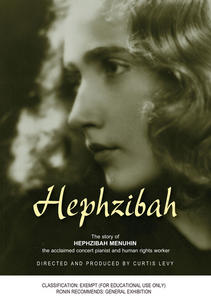 The story of Hephzibah Menuhin is as rich as a novel by Henry James. A child prodigy like her violinist brother, Yehudi, she toured the world giving piano concerts from an early age.

In 1938 Hephzibah, aged 18, married Lindsay Nicholas, Australian heir to the Aspro fortune, and moved from California and the concert hall to live on Lindsay's remote sheep station in Australia.

After World War 2 Hephzibah toured Europe and was shattered by the concentration camps she visited. Having always been an avid champion of causes, she became increasingly alienated from her privileged life in Australia.

The subsequent disintegration of her marriage and her affair with a Viennese sociologist scandalised Australia. Hephzibah and Richard Hauser moved to London where they established their Centre for Human Rights.