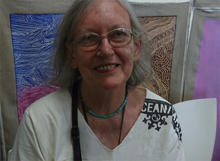 Smith Street Films has been making films for broadcast and the education market since l987, when her first five minute short film Eora was bought by ABC TV to screen after John Pilger's A Secret Country.

The film's writer/director grew up in Sydney and took a keen interest in political and social affairs, when she studied for her Arts (Hons) Degree Sydney University, and was a Fellow at American Film Institute in Los Angeles. In the USA she met some leading writers, directors and editors who taught her to strive outside of her comfort zone, for a more revealing depiction of Australian life and culture.

She also lived briefly in Canberra and Brisbane, and upon her return to Sydney she became involved in the Sydney Filmmakers' Co-operative. This was another sort of education into the new cinema emerging out of Australia, particularly the films of Peter Weir, Gillian Armstrong, Phil Noyce and Fred Schepisi.

In l988 she made Crane – a 28min drama of a man who fell in love with his huge crane in the sky to the detriment of his marriage, featuring Bobbie Noble. It was described by Dr. George Miller as an "unusually compelling film". Shortlisted by Pierre Rissient for the Cannes Film Festival, it was nominated for an AFI Award. The Valhalla Cinema screened the 28 minute film for 2 weeks.

Margaret then worked for TAFE NSW, and she travelled the state documenting the work of the Aboriginal Education Unit at an exciting time of their new programs. This resulted in the documentary Change on Both Sides on the education programs initiated by Koori people. It is 52 mins, and was also bought by ABC TV. Today it screens on NITV.

Her work as a research officer at the Aboriginal Legal Service inspired her 1996 Special Treatment - Locking up Aboriginal Children. It examined the legacy of the stolen generations now, and Indigenous children who are disproportionately arrested and locked up in juvenile jails. This was a finalist in New York Film and TV Festival, and screened on ABC TV and SBS.

A profile about the NSW Aboriginal politician Linda Burney titled Finding our Destiny (available from VEA) followed. Linda is now deputy head of the NSW ALP.

Margaret has always been interested in music and culture, She has made films about unusual charismatic musicians such as Seventh Spring – a film about Roger Woodward, and Breathing with the Earth – a film about Riley Lee (both available from Marcom Projects). The latter showed the extraordinary relationship between Riley and the Koori didge player Matthew Doyle and the Taiko drumming group Taikoz, who have performed for the Dali Lama. Both of these films were screened by ABC TV.

In 2012 she finished a A Smarter Country – creating the future - which profiles pioneers in sustainable architecture and cities, agriculture and energy. It concentrates on the work of Lord Mayor Clover Moore, Senator Christine Milne, Professor Tim Flannery, and the young Matthew Wright of Beyond Zero Emissions.

The other film Margaret completed in 2012 is North of Capricorn, inspired by Henry Reynolds' book. It examines the history of northern Australia, the early contacts between Aboriginal people with Asia and the Pacific, the impact of the 'white Australia' policy on the north, and renewed cultural resurgence today. Margaret believes it is an important film about 'the Asian Century' and the history that has led us here.

Margaret passed away on 18 May 2015 in Sydney, after a long battle with cancer.