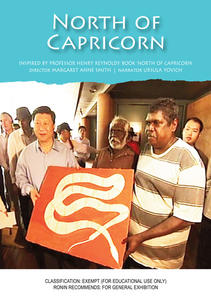 "Based on the book by historian Henry Reynolds, this wonderful documentary looks at a part of Australia like no other. The deep north's deep heritage goes way back before colonial times, when Chinese, Japanese and Indonesian traders fished for sea cucumbers; plantation owners kidnapped Pacific Island workers; and the fledging pearl industry attracted foreigners; making a multicultural haven. With such a diverse ancestry, the population soon produced its own architecture, music, fashion, food and work ethic. Archival footage and interviews with descendants tell a fascinating story. Australia's great divide is not between the city and the bush. It is between the north and the south. Looking at Australia from the top down changes the whole story of our nation's history".

The people of Australia's deep north have lived in a multiracial frontier society, long before the south accepted non-Anglo migrants. The tropical north has different ancestors, architecture, music, fashions, food, vegetation and work ethics and has cultural ties with Asia/ Pacific. Today's descendants revel in their difference, and celebrate being part of the 'Asian century'.

The north has always been closer to Timor, PNG and Indonesia than to Sydney or Melbourne. They were part of the Chinese, Japanese, and Indonesian Archipelago trade route for trepang (sea cucumber) long before the British and French sailed down under. They had relationships with Aboriginal people which continue today.

- Broome attracted Japanese, Malay and Filipinos to work in pearling and shipping
- Darwin drew Timorese, Pacific Islanders and Chinese to the gold fields and market gardening
- Cairns attracted Chinese and Islanders (some indentured) who established farms and businesses

In 1901 the southern founding fathers of Federation introduced legislation to discourage mixed race liaisons, and deport Asians and Melanesians with the Immigration Restriction Act and Pacific Islanders Labour Act. Early entrepreneurial spirit was replaced by Aboriginal missions and bureaucracies. The 'white Australia' policy was born and lasted 70 years, but the north found ways to keep their cultures alive.

Today, despite southern interventions, the north is renewing their ties with Asia/Pacific through festivals, the Arafura Games, business and family relationships, and the visit of the new Chinese President Xi Jinping

Featuring prominent Australian Prime Ministers, the current Presidents of Indonesia and the USA, the music and untold stories of our north, and Professor Reynolds reveals his own complex family heritage.

"The film 'North of Capricorn' is a fresh story of northern Australia, where history and the arts have a vigour of their own." - Michael Cathcart, historian.

"The film re-interprets our history in a very important way. Who we are as a country, and what sort of future is ahead of us. It deserves a very broad circulation." - Professor Michael Wesley, ANU.

See also an excellent review in the Griffith Review: