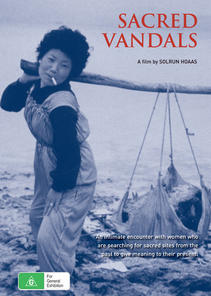 The setting is tiny Hatoma Island, population 47, in Okinawa Prefecture - part of Japan, yet not Japanese. This personal documentary invites the audience to share the experiences of the women through informal conversations and through extracts from the filmmaker's own diary.

Guided by their dreams and illnesses, the women disrupt the established order of worship on the island which brings them into conflict with the island's priestess who has her own story to tell (in THE PRIESTESS; THE STOREKEEPER).