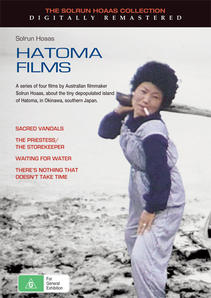 A series of four films by Australian filmmaker Solrun Hoaas, about the tiny depopulated island of Hatoma, in Okinawa, Southern Japan.

A fluent speaker of Japanese, Solrun Hoaas began a series of filming trips to Hatoma Island in the late 1970s, working on 16mm film (using a Canon Scoopix camera), without synch sound, and often under very difficult conditions. On all four of the films in this series, she worked alone - serving as director, producer, writer, cinematographer and sound recordist. She subsequently edited the films in Melbourne, adding her own soundscapes from unsynchronised recordings, and narrating them all herself in the first person.

SACRED VANDALS (1984, 55 mins) - The setting is tiny Hatoma Island, population 47, in Okinawa Prefecture - part of Japan, yet not Japanese. This personal documentary invites the audience to share the experiences of the women through informal conversations and through extracts from the filmmaker's own diary.

Guided by their dreams and illnesses, the women disrupt the established order of worship on the island which brings them into conflict with the island's priestess who has her own story to tell (in THE PRIESTESS/THE STOREKEEPER).

THE PRIESTESS/THE STOREKEEPER (1983, 30 mins) - A portrait of the only remaining priestess who lives permanently on Hatoma. She also runs the only remaining shop, thus providing for the islanders in both a spiritual and material sense. Through a series of quiet conversations, the film reflects the priestess's gentle personality and her own view of the role of ritual in the daily life of the island.

WAITING FOR WATER (1981, 27 mins) - A documentary on daily life on a small depopulated island using a combination of diary narration and English subtitles. The film uses an ebb-and-flow structure to capture the recurring events and images of life on an island that once had over 600 people, but now only little over 40 due to the move to the cities 'for the sake of the children's education.' WINNER! Special Jury Prize, Uni-Japan Competition, Tokyo 1981. Official Selection! 1981 Margaret Mead Film Festival, New York.

THERE'S NOTHING THAT DOESN'T TAKE TIME (1981, 7 mins) - A mini film from Hatoma showing a 76-year-old woman weaving a basket for the fishing. During the task, which takes from morning till late afternoon, she talks about herself and her life.

The recent Japanese hit TV series Ruri no shima takes up the story of the school on Hatoma and was filmed on location there. The uniqueness of the Hatoma films was recognised by their inclusion in the 30th Anniversary program of the Japan Ethnological Film Society in Naha, Okinawa 2008. SACRED VANDALS screened at Hosei University's Institute of Okinawan Studies as part of a major Okinawa Documentary Film Festival in Tokyo in September 2008, a witness to the film's enduring relevance.